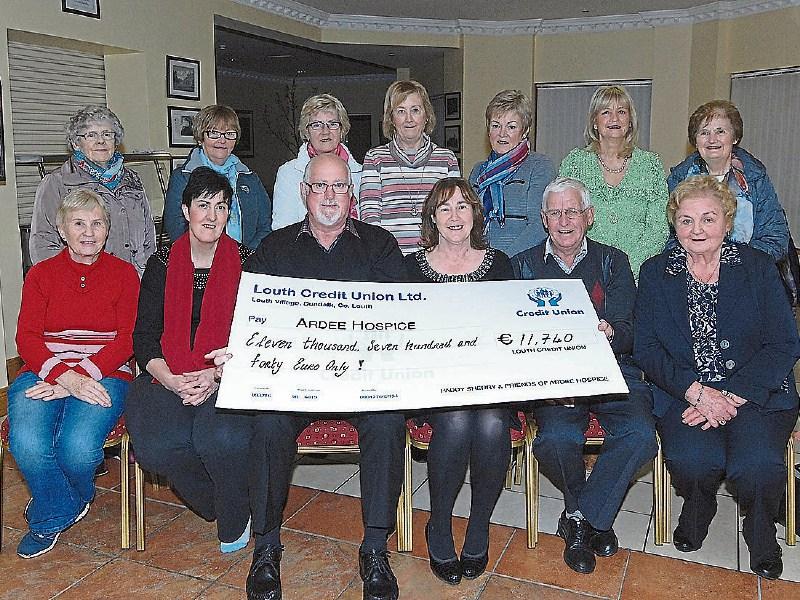 Paddy Sherry and Friends of Ardee Hospice have just handed over over the proceeds of yet another very successful concert in aid of Ardee and Mid-Louth Hospice.

This is the fourth concert he has organised.

This year they raised €11,740 from a Mike Denver concert at the Nuremore hotel.

“I do a lot of the hospital transfers for cancer patients,” said Paddy, “as I have cabs and minibuses and in 2013 I decided to do some fundraising for Ardee Hospice as they do so much for the people not just in Ardee but in all surrounding areas.

“The first concert started with Jimmy Buckley,” said Paddy. “Then Derek Ryan and Jimmy came back again in 2015.

He was named entertainer of the year and he showed it on the night when he took the house down.

“I would just like to thank all the ticket sellers most of whom are cancer patients themselves.

“All who helped on the night especially Ray Murtagh who warms up the crowd for the main act and Paddy Ward who does MC.

“They both did a great job for all four concerts then you have people who buy tickets and don't go, give donations and spot prizes.

“These people are amazing. They never say no.

“Then you have the audience who go every year and support this great cause. The people who put on the transport: Minty’s, Finlay’s, Sherry’s, and Flexibus, who gave a donation towards transport.

“My wife Bernie and I will never be able to thank everybody enough for their help.