Patsy was longest serving undertaker in the town 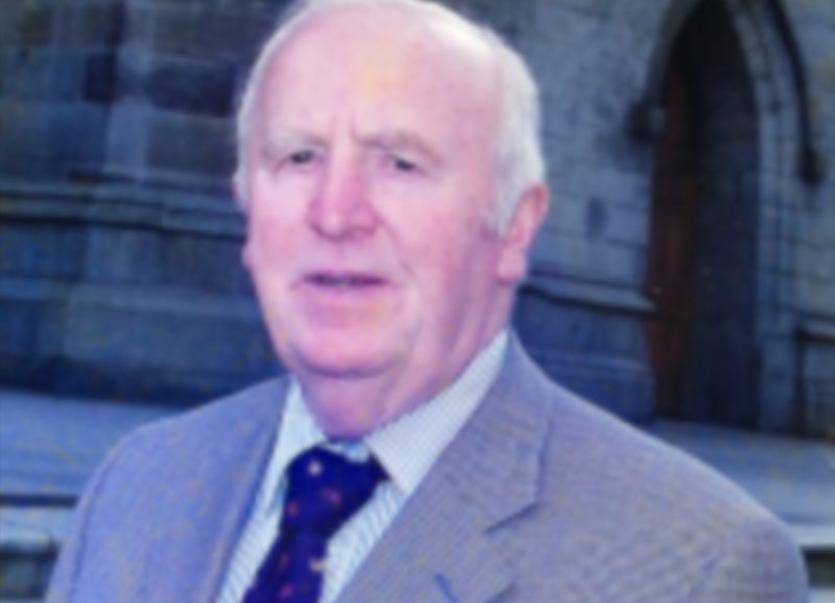 Patrick (Patsy) Rogers who died peacefully aged 91 at his home on October 2 last was the longest funeral undertaker in the Dundalk and wider catchment area. He was the principal of McGeough’s Funeral Directors and was engaged in the business over 60 years until he retired in 2013.

Known best as Patsy, he was a genial and very well liked and regarded figure, who was widely known and highly respected through his profession, and was the last of his era.

But what singled him out was that his wife and family were paramount, a man of strong faith with a deep humanity that he showed not only in his professional capacity but in his quiet and effacing manner in which he engaged in providing for the needy and elderly through his involvement in the town’s Rotary Club, with the organisation of the Meals of Wheels service and Christmas dinners and parcels.

He managed to find time to relax and enjoy the company of his dearest and dearest as a very loyal husband, father, grandfather and very loving, witty and emotional individual who loved his native town. The nature and demands of his occupation didn’t always make it easy to achieve that recommended balance between work and family and leisure He also operated a taxi service as part of the business, which brought him in contact with famous personalities, one being former Manchester United and England star Bobby Charlton.

But he was helped by his faith. Also sport was a very important part of Patsy’s life and kept himself active and fit and healthy .

He attended one the town’s first gyms, run by the late Dee O’Kane at the Ramparts. He went there three times a week, and enjoyed the banter as well as the exercise. A non-smoker and only a social drinker, he exercised also through swimming, outdoor in the sea at Salterstown and in the former outdoor pool at Blackrock. He encouraged his daughters to take it up and when they attained a proficiency to compete he was there by their side driving them to events in different parts of the country.

He shared his love of soccer with them, coaxing them along to games in Oriel Park, being a lifelong supporter of Dundalk FC and an annual season ticket holder. This was born out of a passion for soccer, which he played into his 30s.

His idol was the late and legendary Joe McEntee whose Saint Joseph’s team he played for in the local junior league and was ever so appreciative of the joy that he provided him. He honoured his memory by attending the annual anniversary Mass for one of the town’s most prominent soccer figures in Saint Malachy’s Church that he attended all his life. Patsy’s soccer career also entailed playing stints with Dundalk Reserves and Newry Town.

Another big sporting love of Patsy was horse racing, although not into gambling. He attended local meetings, and used to travel with his late friend and former soccer player Jimmy McEvoy to the annual festivals at Cheltenham and Aintree. He was so enthralled with the Grand National that he took it upon himself one year to walk the course the day after.

He possessed a wealth of knowledge about the sport, and trainers and horses were one of his great subjects of conversation.

However, of the many sides to Patsy one stood out and it was his deeply human and caring nature in the honourable and decent manner he dealt with people, and helped others in a voluntary capacity without seeking recognition.

He was immensely gifted with his hands. There wasn’t a job that he couldn’t or wouldn’t do, and a testimony to his craftsmanship is his family home Kia - Ora, Jocelyn Street that he totally renovated and refurbished when he moved the family funeral business there. It was his pride and joy and he also insisted in doing all repairs and renewals.

Patsy proved very adaptable to change and new technology, and how to use computers. He computerised the whole records of the business, a task that he largely undertook and updated the records himself.

He also had a gift and passion for making furniture that he sold to augment the family income. He also loved going to auctions to buy pieces of furniture.

He was rarely seen out without his beloved wife Dorothy (nee Larkin) of 63 years. They met at a dance in the Gaelic League hall. Dorothy came from Hill Street. The couple’s weekly outing on a Saturday night for a meal and a chat in The Brake was something he very much enjoyed.

He also enjoyed the regular lunch out with his friends in the Rotary Club in Derryhale Hotel and latterly in The Windsor. He loved the family holidays in Portugal and Lanzarote, which provided rare time away from the job.

He also loved London and attending shows and musicals there as well as in Dublin, and was a supporter of local group productions in the town hall.

By most he will be remembered for his relaxed, perceptive and caring manner which was so eminently suitable and disposed to empathising with and guiding bereaved through the darkest and most grief stricken circumstances that can befall them with death. In his own innate way he was able to provide succour and comfort in the most inconsolable situations.

Daughter Rosemary took over when he retired and is now in charge of the business with the assistance of Patsy’s grandson Oisin. Oisin is the fifth generation of the family involved, and was to Patsy the son he never had. In his latter days he also gained a new lease of life from his great granddaughter Molly.

Patsy started out working part-time helping his uncle Jemmie whose parents started the family business in 1892. It was located in Park Street and remained there until 1978, when a move to it’s present location in Jocelyn Street facilitated expansion and the building of a funeral home to cater for the changes in the industry and provide new services.

He was born in Priorland and resided in Thomas Street and then Park Street before spending the final phase of his life in Jocelyn Street.

He was one of three sons of the late Patrick and Nora (nee McGeough) with his father a train driver from Belturbet, Cavan. His brother Jim died at the age of only six or seven, and he was also predeceased by his other brother, Dessie

He attended the Friary National School and the Technical School in Chapel School before going to work on the GNR in the body builders shop. He then was employed in McArdles coachbuilders, another local industry that sadly closed.

He took over the family undertaker business in 1964 running it with his mother until she tragically died.

His passing leaves a void that can not be filled for his wife, Dorothy, daughters, Patricia (Dublin), Rosemary and Annmarie. He is also very sadly missed by his grandchildren, Patrick, Oisin, Irene and Rian, great-granddaughter, Molly, sons-in-law, Michael Molloy, Declan McDonnell and Alan Bourton, Oisin’s fiancé, Sinead and sister-in-law, Kathleen Rogers.

After reposing at the family funeral home, Patsy was taken to Saint Fursey's Church Haggardstown on the Tuesday.

Patsy was laid to rest in Saint Fursey’s cemetery.