Keane: Dundalk stars could play a part in Vienna 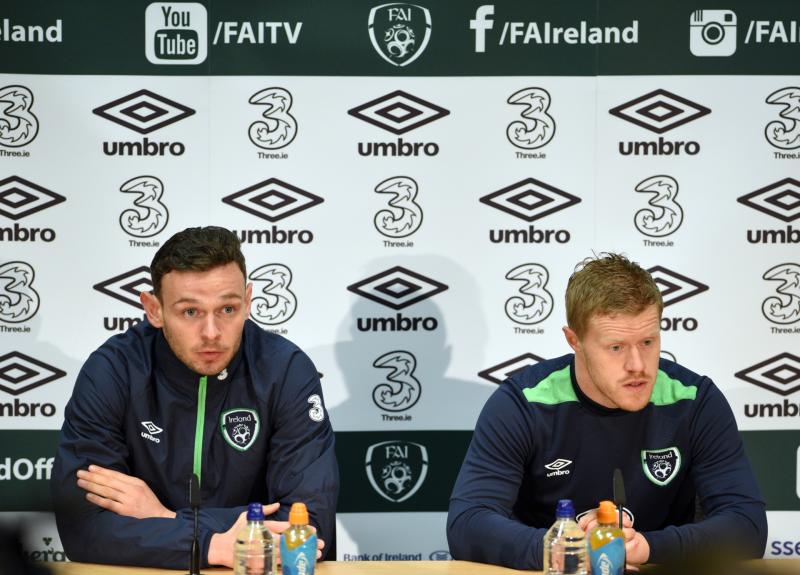 Roy Keane believes that Martin O’Neill would have no qualms in throwing Daryl Horgan and Andy Boyle into Saturday night’s World Cup Qualifier with Austria in Vienna.

The Dundalk pair trained with the international squad in Abbotstown on Tuesday morning and speaking afterwards, Keane said they weren’t there just to make up the numbers.

“I would like to think all of the players in the squad would have a chance of starting on Saturday and that includes the players you have mentioned. Why have them here?

“As we keep saying, they are in the squad on merit. They are not here thinking that deep down we’re looking at a friendly in a couple of months. The reality is we’re looking at the next game.

“It will be nice to see them training up close in the next day or two. They believe they will have a chance of starting and why not? They are playing against really good players in Europe.

“I think the big problem going over the years with League of Ireland players is the question mark over fitness but not with these boys, and I mean other lads in the League of Ireland, not just the Dundalk boys. That’s a bit hurdle they’ve got over in the last couple of years, so that’s that issue,” he continued.

“Could they deal with going into an international match? Is it a big ask of them? Probably, but sometimes you only find out when you throw them in and I’ve seen them play in Europe against really good players and they have coped well.”

Boyle and Horgan have both played an integral part in each of Dundalk’s ten European games this season and Keane agreed that their exploits against continental opposition would only enhance their chances of being involved with the international side.

“It certainly helps them,” he said. “Your question mark over any player that is doing well is who are they up against, how they are dealing with the demands and the travel and that added pressure.

“The manager has watched them at other times when they’ve been up against good teams and they are doing well. So yeah, it’s a big plus for them.”

Turning his attention to Horgan, the former Manchester United captain said that the little winger brings ‘something different’ to the Irish set-up.

“I suppose so, yeah, because he affects games and there’s not many of them around, lads who come out and make things happen.

“It would be nice to come out and speak to you in about 48 hours when we’ve had a look at them close up because you can’t beat that as a coach.

“When you’re working with players, like other lads we have brought in like young Callum O’Dowda, you can’t beat watching a lad close up. You get to see their body shapes a bit better and how they cope with playing against lads who play in the Premiership.

“We’ll have a better idea in the next few days of how far these lads have come. But yeah, Horgan does affect games and makes things happen and, again, there are not many of them around.”

Horgan and Boyle have both been linked with moves to the UK in recent weeks but Keane suggested that he would have no problem with them continuing to ply their trade in the League of Ireland next season.

“They’ve obviously got decisions to make. I don’t know what options they have available and I generally hear that most League of Ireland lads’ contracts are up.

“I bumped into a number of people at the cup final working for English and Scottish clubs. People say can they step up? That the million dollar question. You don’t know.

“Their mate went over there last year, (Richie) Towell, and I bought one or two League Of Ireland players over the years, going back to David Meyler, Roy O’Donovan, Colin Healy, people like that, and sometimes there’s a big gap.

“It’s a big ask for them but as I said, the benefits of playing in Europe and their fitness levels will certainly help them if they go get across to England or Scotland, whatever that level might be.

“I think it’ll be an interesting few months for these lads and I’m sure they’ll have good options. Those are the rewards they’re getting, I suppose, for doing well in Europe.

“And obviously they have the option to stay at Dundalk because Dundalk look like a club, if they continue doing things properly as they are doing and if they invest properly in the club the money they’re getting in Europe, who’s to say they’re not happy and settled there and will get the contracts they want and stay here. Who knows?

“Obviously the boy Towell went over last year and he’s had one or two injuries and it’s not quite happened for him. So it’s not all this fantasy that you go over to England and everything falls into place for you. Certainly not. But I’m sure they’ll have good options.”