Horgan and Boyle train with their Irish teammates

Dundalk pair in squad for World Cup Qualifier in Austria 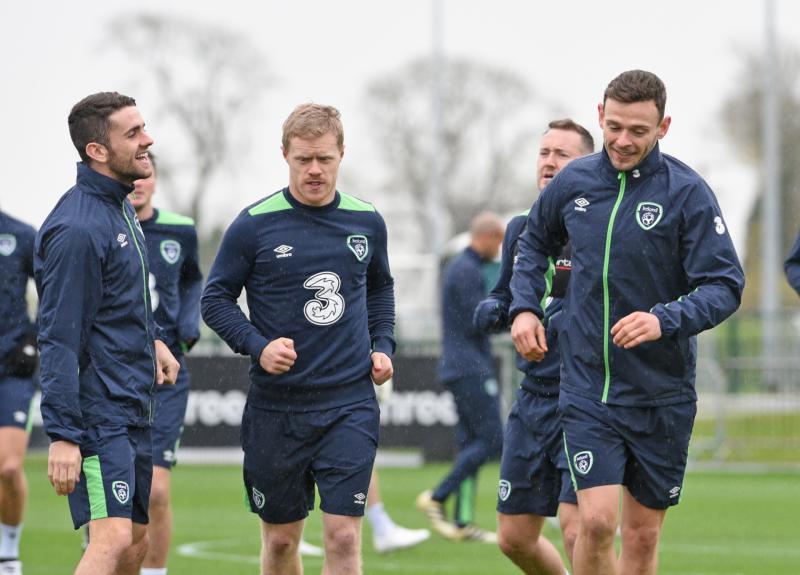 Just 24 hours after losing the FAI Cup final to Cork City, Daryl Horgan and Andy Boyle were handed the perfect pick me up when it was confirmed that both had made the Republic of Ireland squad for this weekend’s World Cup Qualifier against Austria in Vienna was confirmed.

Both players were selected in Martin O’Neill’s provisional 33-man panel last Wednesday but the news that they made the final 28-man squad was made public on Monday evening.

It came shortly after the FAI released a Tweet showing two training kits alongside pictures of Boyle and Horgan with the message, ‘The kit is ready for the two new arrivals.’

No League of Ireland player has worn the green jersey in a competitive match since Shamrock Rovers’ Pat Byrne lined out for the Republic of Ireland in their 4-1 loss to Denmark in a World Cup Qualifier in 1985 and Dundalk boss, Stephen Kenny, said the pair's call-up was a huge moment for domestic football.

“The whole idea of that shows there are issues there. How do we address that? We have to become better ourselves and improve all the time ourselves and create an environment where players can flourish and become internationals."

Boyle has been an integral part of the Stephen Kenny era at Dundalk. Signed from Shelbourne ahead of the 2013 season, Kenny’s first in charge at Oriel Park, he has been a rock at the heart of the Lilywhites defence.

“Andy was one of my very first signings. He’s been here four years and has gotten better every year. He’s been a young captain when Stephen O’Donnell has been injured. He’s been imperious really, a top class player and a real natural footballer.”

“Daryl just gets you on the edge of your seat. People pay money in to watch Daryl. He just has this tremendous individual skill and ethic,” said Kenny.

“It couldn’t happen to two better people. It would be great to see them play for Ireland at some stage.”