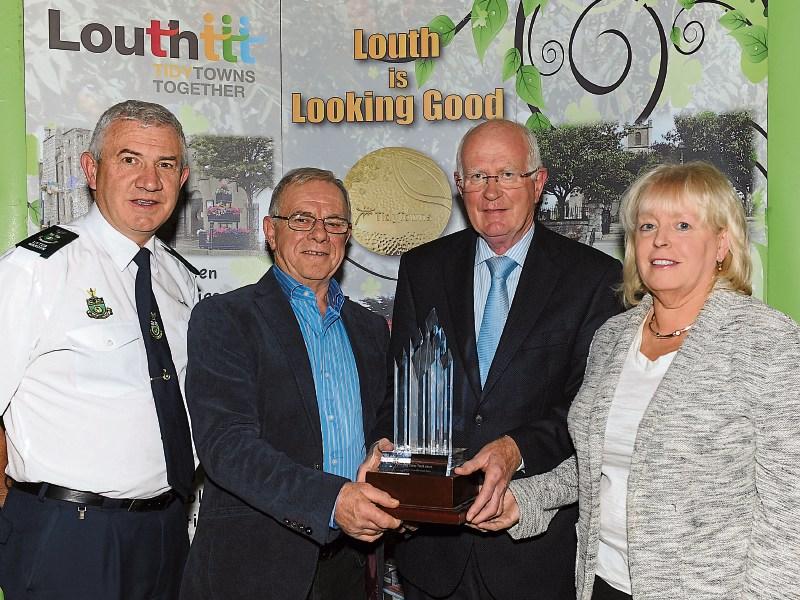 The recent Louth Looking Good Awards organised by Louth Tidy Towns Together, has once again shown us just the dedication and the hard work that the Tidy Towns groups throughout the county put into keeping their communities bright and beautiful places to live in.

Blackrock was the main prize-winner this year scooping awards for the Litter League, Old Haggardstown Graveyard and in the Waste Minimisation Category, as well as being crowned Overall Winner of Louth Looking Good 2016.

Their success didn’t stop there as Ann Fennelly, the Blackrock nominee, won the prestigious Environmentalist of the Year.

Blackrock Park was highly praised by the adjudicators and they also said that the Beautiful Blackrock campaign created friendly rivalry among the estates, residential properties and retail premises.

All the properties along main street are now contributing very well with a number of real show stoppers, the adjudicators said.

You are seasoned professionals, the adjudicators said, and the standards were high as usual.

Despite their best efforts, the adjudicators failed to find one scrap of litter in Dromiskin.

The bring bank area was also spick and span.

The beautifully presented Clós na Manach housing estate in Carlingford was, for the second year, deemed to be the Best Presented Housing Estate in the county and it received the Nicholas McCabe Perpetual Award as well as a cash prize sponsored by Matthews Coach Hire.

Never ones to rest on their laurels there is no doubt that the imaginative and dedicated Tidy Towns volunteers are already planning their work programmes for next year to ensure that Louth continues to look good and shines in the 2017 National Tidy Towns competition.

Fresh from the success in the National Tidy Towns competition where every town and village in Louth increased its marks significantly, Tidy Towns groups from throughout the county assembled in the Crowne Plaza Hotel last Thursday night to hear the results of Louth Looking Good 2016.

With Indaver Ireland as the lead sponsor, this initiative has gone from strength to strength in the last number of years, as was evidenced by the fantastic photographic displays produced by Print Express and a video produced by Ken Finegan from Newspics, which highlighted the beauty of towns and villages in the county.

Lead sponsor Indaver was represented by Jane Hennessy, who congratulated all participants on their fantastic work ethic while Joan Martin, chief executive Louth County Council, was also fulsome in her praise for the volunteers who give their time freely to ensure such a high standard of environmental presentation.

Category sponsors presented prizes to the many residents associations who were honoured on the awards presentation night.

The event was organised by Louth Tidy Towns Together, with assistance from Louth County Council and has become an annual highlight on the social calendar.