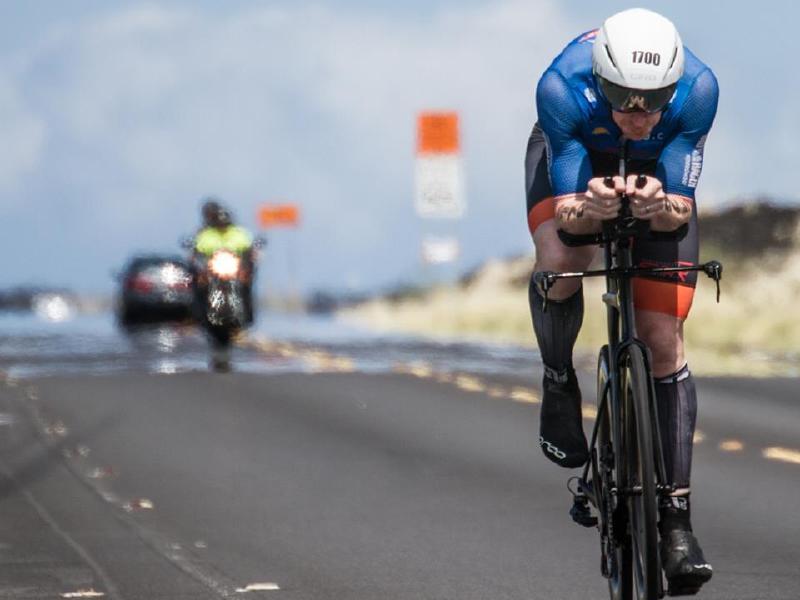 FOR local athlete Bryan McCrystal the chance to travel to Kona, Hawaii to compete in the World Ironman Championships was one not be missed. Realising one of his life’s ambitions Bryan completed the event earlier this month and having faced some of his toughest conditions to date, made it home to tell the tale.

“I loved every minute of the hurt and getting that finisher's medal far outweighed any win I've had in my career. The race lived up to all the hype that surrounds it and it was an honour to toe the line with such talent.”

Having qualified through Ironman UK/Bolton in July, Bryan has proven himself a formidable competitor by any standards but for him this was a race like no other.

“At the start if you asked what outcome would satisfy me I would say winning would do that but in the middle of battle that quickly diverted to just giving the race the respect it needed and take the beaten the island gives you. And I mean that. Here you have two races, one against your competitors and the other is against the island. Look at all the top guys that nail races all over the world and they come here and get their asses kicked. I love and hate this place at the same time”.

For Bryan the challenges started from his arrival 2 weeks before the race, but by race day he was prepared to give it his all.

“I had difficulty adapting when I arrived. It took some time but come race day I was ready. The swim was like waterpolo and I expected that. Given it is the world championships I knew I wouldn't find clear water to find my rhythm, instead I took the other approach and locked in and fought every stroke keeping in the draft and sucked along with the fury. I was delighted to see the clock sub 60 mins on my exit. You don't necessarily have to be a great swimmer in Kona you just need to know how to race it.

“I was really looking forward to the bike leg. I rode 5% below what I'd normally do because this island demands that, and in hindsight it maybe wasn't enough. There is a problem in this race with drafting and I had guys trying to ride on my wheel a lot. I didn't lose concentration and waste energy worrying about them, I just do my thing.

“Unfortunately with 50km to go I knew I had problems and I started cramping inside of both legs. That was new to me and it forced me to ride home very gingerly. With the heat I was taking on huge amounts of fluid and nutrition but it still wasn't enough. I must have drank 12-15 bottles on the bike alone.

“I started my run very much dehydrated but I knew this race was always going to be finished even if I had to lay down and take a nap. I was in a real bad way from the off but as I fuelled more at the aid stations I was coming in and out of form. One minute I was running 3:45km pace the next I could be walking. I had no happy medium. But I knew to stay patient because everyone blows their lights here.

“Even though it was the hardest race I've ever done I enjoyed every minute of it. This race is one that you need to adapt to and change how you race.

“Obviously if I came back again I would change a few more things but that's racing. Going I to the race I felt I had a 8:45/50 in me so finishing 9:12 wasn't the worst in the world. As I said earlier you need to learn and understand this island. Racing on the same road with the world best feels good and it's something I'd like to experience again, in a few years’ time”.

A feat such as this cannot be attempted without much support, both at home and abroad, something which Bryan has in abundance.

“I couldn't have made this happen without the support of sponsors and mainly my family and this race was much about them as me. I was in Kona two weeks before the race and I missed the kids and my wife Karen a lot. I think that's the last time I’ll do something like that again.

“I also had great support on the Island with the Irish crew and I was the plus one guest at every meal. I met our Irish Kona gal Una Burns from Tyrone and the craic was mighty.

“Rob Griffiths made the trip also with his wife Julie and they were a godsend in terms of keeping me sane.

“Staying with local Asea guys Autumn and Keith Johnson I had perfect accommodation and I landed on my feet when I realised Autumn had a clinic and I got plenty of massages and her knowledge of the race was quite surprising”.

As to whether he will be back to give it another try Bryan said:

“I can be very competitive at the top including amongst the pros on any other circuit in the world. This baby is a different animal, I'm just glad and proud I can chalk it off and say I did it. I can also now guide the athletes I coach on how to tackle it. I will be back but it won’t be for another few years.”