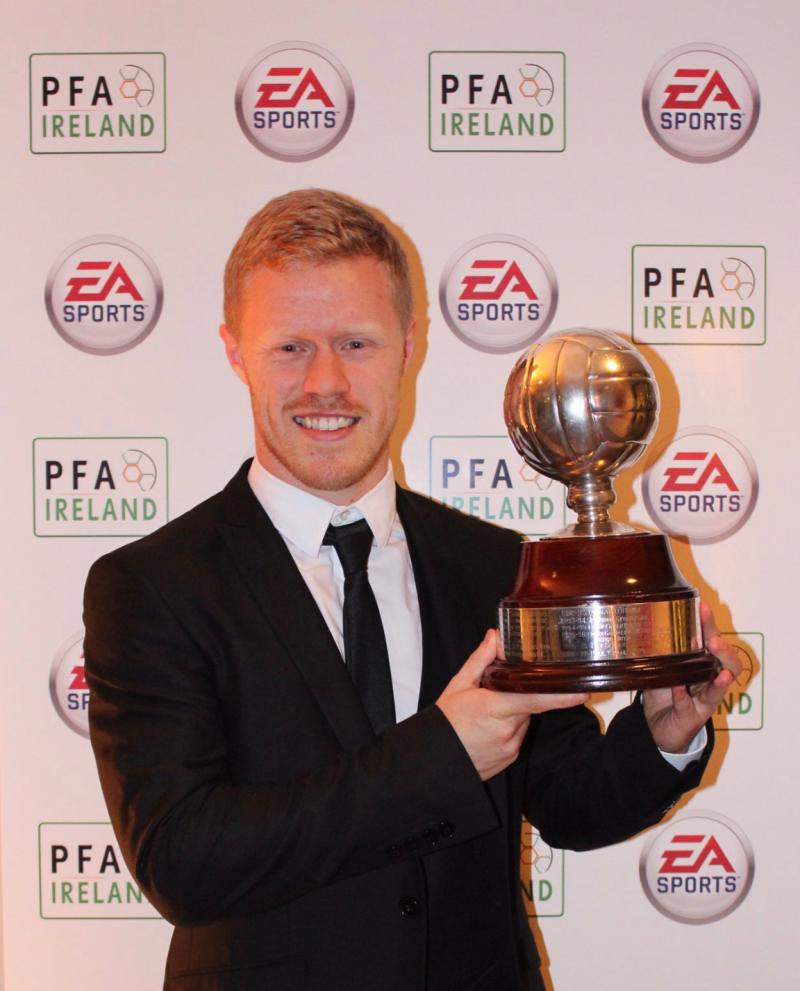 Daryl Horgan pictured with his PFAI Player of the Year award.

Advancing to the Last 32 of the Europa League is an attractive enough proposition in itself but it may also hold the key to Daryl Horgan’s future at Dundalk.

The Lilywhites fly out to Russia today ahead of their clash with Zenit St Petersburg at The Petrovsky Stadium on Thursday evening occupying second place in Group D.

And Horgan, who was crowned PFAI Player of the Year on Saturday night,  said that qualification to the knockout stages would certainly be a ‘huge’ factor in determining where he plays his football next season.

“I’ve said it before, I’m not going to go to another club in England or wherever and play in the Europa League or the Champions League. There’s no hope of that really.

“To be in a position where we could be in the Last 32 of the Europa League would be absolutely incredible and I’ve already said that it would have to be a tremendous offer to take me away from Dundalk.

“I’m, really happy,” he continued. “It’s a great club with a great group of lads and it’s a progressive club. They really want to kick on. There will be no standing still. a young family here so I’d need to weigh everything up.

“In a sense, it’s a waiting game and it’s about seeing what might happen but at the minute there have been no offers so I’ve nothing to decide. If something does come, we’ll have to see.”

Zenit came from a goal behind to beat Dundalk in Tallaght three weeks ago and are raging to maintain their 100% start in the section.

Horgan, though, believes that Dundalk can get a positive result in St Petersburg.

“I think there is an expectation now because of how well we’ve done this year,” he said.

“At the I suppose everybody thought we’d be the whipping boys with no points but the way we’ve played, we’ve brought the expectations on ourselves which is brilliant.

“If you’re going through budgets….. their squad cost €165 million, they’ve their own plane, they turned down a €30 million bid for Axel Witsel, things like that, then we’re miles off it but I don’t see the game being too different than the one in Tallaght.

“They’re so good at keeping the ball that they’ll probably control it again. We’ll have to bide our time and counter and when we have the ball we’ll have to sting out of it and keep possession.

“They’re massive , but we were the width of a post away from going 2-0 up in the first game. It’s the small differences. They had their two chances and scored with them.”

Dundalk won’t have too much time to dwell on the result in Russia. Less than 48 hours after they arrive back in Ireland, they meet Cork City in the FAI Cup final at The Aviva Stadium.

“If you were asked at the start of the year would you like to be in this position you would have snapped the hand off,” said Horgan.

“It’s a great opportunity for us. It’s two very difficult games but it’s going to be absolutely brilliant and I’m really looking forward to it.

“There’s no point in getting overwhelmed by it. We’ll go out  and try and pick up a result in Russia and then come back and get the head straight for Sunday.

“It helps that it’s a cup final. It’s not a league game where you can, in a sense, get complacent. It’s a massive occasion, a massive crowd and it’s special for everyone.

“The fact it’s the FAI Cup final, at The Aviva, means it’s a special day for everybody in the town and hopefully that can give us that extra bit of a lift that we might need.”