Dundalk lift the league title after win over Galway United 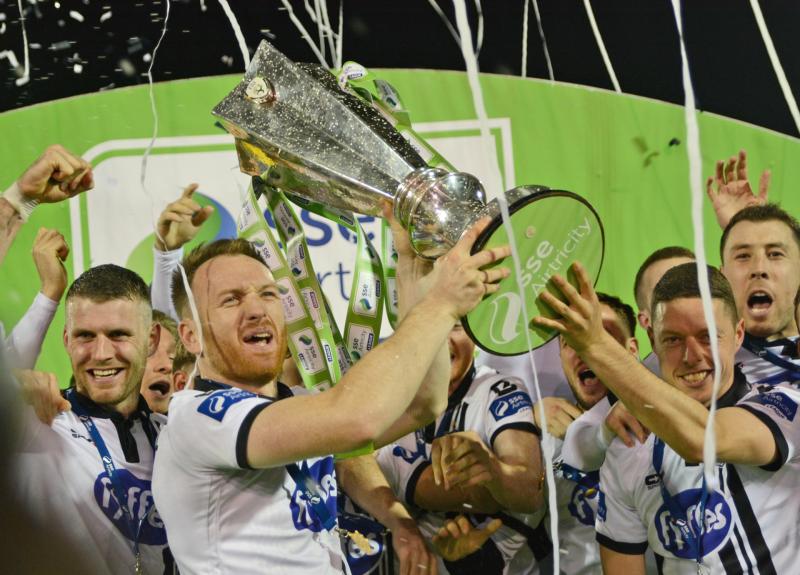 Dundalk were officially crowned SSE Airtricity League champions on Friday night with captain Stephen O’Donnell lifting the trophy for the third year on the trot following their 4-1 win over Galway United at Oriel Park.

Champagne football on a champagne night was the verdict of PA announcer, Mickey Duffy, and it was hard to argue with his assessment, Stephen Kenny’s side ending their campaign seven points ahead of Cork City with 25 wins, two draws and six losses from their 33 game campaign.

The game marked the beginning of another momentous week for Kenny’s side who face Zenit St Petersburg in a crunch Europa League clash in Russia on Thursday before meeting Cork City in the FAI Cup final at The Aviva Stadium just 48 hours later.

One player who boosted his chances of being involved in those games is former Rangers attacker, Dean Shiels, who helped himself to a well taken first half brace.

Both were the result of well worked moves, the first in the 13th minute coming from a Ciaran Kilduff flick, the second, 24 minutes later from a neat one two with Robbie Benson. Sandwiched in between was a 35-yard effort from Paddy Barrett that left Galway goalkeeper, Conor Winn, red faced.

Galway pulled one back in the 55th minute when Ryan Connolly forced home at his second attempt after Gabriel Sava did brilliantly to save his initial effort but but Ciaran Kilduff made it 4-1 in stoppage time to spark a huge title party.