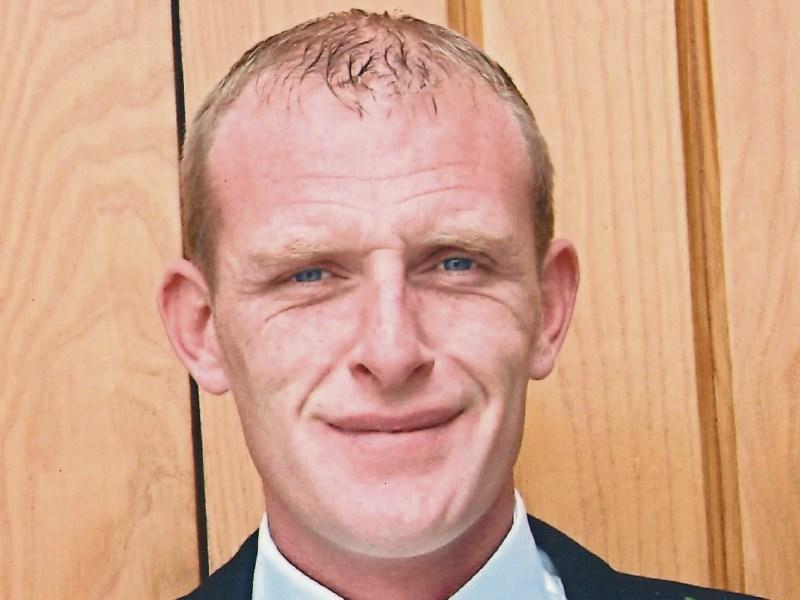 The death of Mark Faulkner at an all too young age of 41 evoked an outpouring of sadness and sympathy for his family that was reflected in the huge attendance at his obsequies that was a testament to the standing of his family and the regard in which he was held.

Mourners from the whole gamut of his life from the neighbourhood where he grew up to the many friends that he made along the way with his passion especially for soccer and motor cycling came to pay their respects and share in the sorrow of his wife, children and family.

Mark was delivered the devastating news that he was in advanced heart failure after being admitted to hospital at the start of February. This resulted in an eight and a half month spell under the most exhaustive and intensive of medical care and attention in Our Lady of Lourdes Hospital but heartbreakingly nothing more could be done for him.

So he came home to Oakland Park to spend what was thought to be his last few days on September 15 last but thankfully that extended to 24 days to October 9, providing him and his family additional time to become reconciled and enjoy and make the most of that precious time together to say their goodbyes.

His wife Orla and his two children especially were gratified and privileged to be with him and see to his needs and the dignified fortitude with which he accepted his fate without complaint.

Mark grew up in nearby Marian Park. He was the second youngest of six in the family of Margaret and the late Dennis Faulkner, who had three other sons, Edward, Andrew and Richard and two daughters, Geraldine and Denise.

He attended Scoil Eoin Baiste Boys School in Fatima and went on to Dundalk Technical (O’Fee) College on the Dublin Road.

He gained employment in the window fitting business with Jim McGeough. He also worked in the Stribel electronics components factory that was based in the Finnabair Industrial Estate in town.

Before his illness he did part-time work with his brother Richard on the latter’s coal run, and also was employed with another local coal delivery merchant for a couple of years

He was a man of passion and talent, which was revealed in his writing of short children’s stories, the title of one “Steptoe and the Mighty Mouse” contains the affectionate nickname “Steptoe” which his wife humorously called him after the character in the long running television comedy series. Two others “Jenny and Her Magic Bloomers” and “Billy with his Weird Belly” his family plan also to have published and donate the proceeds to charity.

He was very outgoing and personified fun. He was easy going and didn’t take life seriously and was comfortable in his own skin, according to close family.

Mark met with wife, Orla Downey from Ladywell Terrace in town as they approached their 21st birthdays. They married eight years ago, and set up home and settled in Oakland Park.

Mark was always interested in soccer, in which he wholeheartedly took part as a player, coach, manager/mentor, and biking and rallying were another big part of his life.

With his brother Richard and Joe Mellon he was prominently associated with Castle Rovers that competed in the Dundalk Summer League, as a player and involved in running the team. When the team finished he also managed another team.

He was a huge soccer fan, but also gave of his time, energy and displayed his sporting skills at hurling with the local Naomh Moninne club. He simply loved sport which embraced even his quirky flutters on games on a Saturday

When his passion for soccer dimmed after he stopped playing, coaching and managing, he found another outlet that brought him out of himself and into which he put his heart and soul in the last few years.

He joined the Drunken Mongrels bikers club, comprised of kindred spirits, a very close knit bunch and very family orientated. He enjoyed the company and travelling to rallies all across the country.

He never drove a car, with a motor cycle his mode of transport from when he learned to drive. He just loved to get out on the open road and head away for a spin and forget his cares and troubles. Wife, Orla used also to accompany him on his travels.

His attachment to his motor cycle was there until he entered hospital, and the send-off his biking friends gave him was exactly as he wished, with his motor cycle leading the cortege. They provided him with a Guard of Honour and carried him to his resting place in the adjoining cemetery from Saint Joseph’s Church, Fatima after his Funeral Mass.

He reposed at his residence, Oakland Park on the Monday and Tuesday before being removed on the Wednesday to Saint Joseph's Church, Castletown. Father Paddy Rushe who officiated at the couple’s wedding celebrated a beautiful Mass. He also gave a touching eulogy.

The Readings were given by niece, Ashling Quigley and Darren McCooey, a representative of the Drunken Mongrels club, while the Prayers of the Faithful were led by nephew, Dylan Quigley, niece, Leanne Downey and family friend, Siobhan Martin.

Gifts symbolising Mark’s life were taken to the altar by daughter, Seanin, Neil Black, Brendan Mostyn and Shane Faulkner The music was provided by Roisin Crawley and Olivia Finnegan.

The deceased’s family express their sincere gratitude to Our Lady of Lourdes Hospital and the Palliative Care team of whom they can’t speak highly enough for their care and attention to Mark. The family are also deeply grateful to neighbours and friends and all who provided help and support.