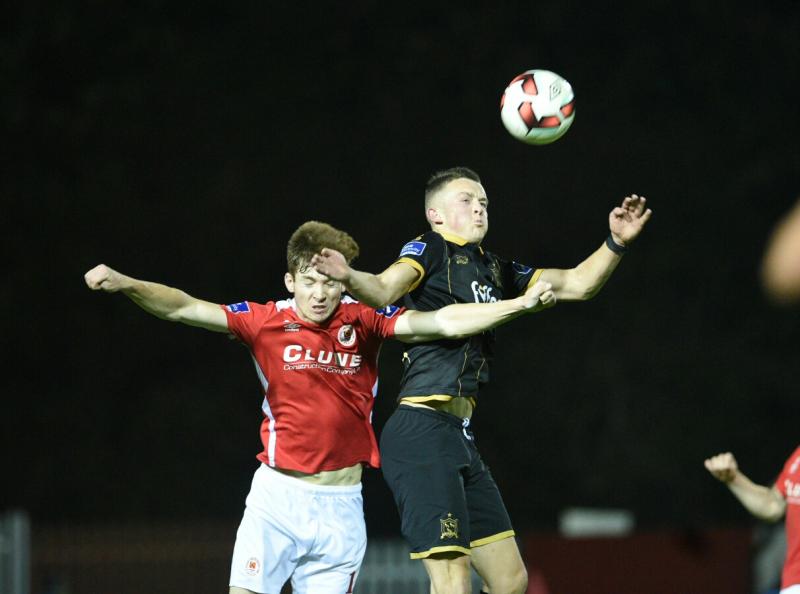 Two days after clinching the league title, Dundalk suffered their joint heaviest defeat under Stephen Kenny as they were put to the sword by St Patrick’s Athletic at Richmond Park.

Liam Buckley’s side gave the champions a guard of before the game but that was the niceties ended.

As expected, Kenny made a host of changes to the side that won the title less than 48 hours earlier with Ciaran O’Connor, Dean Shiels, Keith Dalton, Michael O’Connor and Georgie Poynton all handed their first league start for the club.

And Pat’s dismantled the makeshift Dundalk XI with duo, Christy and Conan Byrne, having a field day in the opening 45 minutes.

Kenny was then forced to hand out a sixth league debut when Carlton Ubaezuono came on to replace the injured Shane Grimes in the 18th minute.

Pat’s hit the front a minute later. Fagan left Alan Keane for dead with a brilliant turn before playing it wide to Byrne on the right. The striker continued his run, stylishly firing home Byrne’s subsequent cross.

Both were involved again seven minutes later. Paddy Barrett’s poor clearance was seized upon by debutant JJ Lunney and he picked out Fagan, whose first touch lay-off was rifled home by Byrne.

Full-back Ian Bermingham was next to get in on the act, smashing home at the far post after Byrne, yet again, had played a dangerous ball across the face of goal.

That left it 4-0 at the break and the scoreline caught the eye of Sligo Rovers manager, Dave Robertson, who used his Twitter account to apparently question Kenny and Dundalk’s ‘integrity’.

Dundalk pulled one back three minutes after the restart when Dean Shiels toe-poked past Clarke and Michael O’Connor gave the visitors hope just past the hour when he forced a Sean Gannon cross over the line.

Lunney, though, put the seal on Pats’ win when with a great strike from the edge of the area with four minutes to go.