Kenny: Winning a third league title on the trot would be special

Lilywhites will clinch title if they beat Bohemians on Sunday 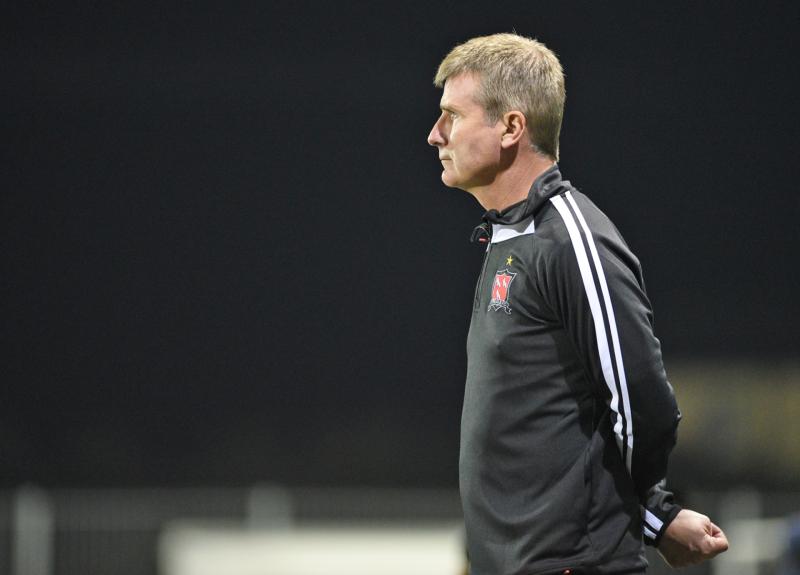 They say a week is a long time in politics, but, for Dundalk this season, a week can almost feel like an eternity.

It’s hard to believe that just six days after they went into battle with Cork City at Oriel Park, holding a one-point lead at the top of the table, Dundalk are now seven clear and on the verge of clinching their third league title on the trot following a decisive night in the title race on Monday.

Pat’s and Cork meet again at Turner’s Cross on Friday night where only a win can keep City’s faint hopes alive. Even then, if Dundalk a victory over Bohemians on Sunday, the league trophy will remain at Oriel Park for another 12 months.

“It’s only six days since we were a point ahead after losing 3-0 at home to Sligo,” said Dundalk manager Stephen Kenny after his side’s win in the midlands.

“Big questions were asked of us. People were tipping Cork to win the league at that stage so for us to turn that around, win the three games since that emphatically and get nine points just a brilliant response from the players and I really can’t speak highly enough of them. They were really terrific.”

Dundalk fans are preparing for a title party on Sunday but Kenny knows that the job still has to be completed and, with injuries mounting, and the small matter of a Europa League tie with Zenit St Petersburg in Tallaght on Thursday night, the 44-year-old is taking nothing for granted.

“We haven’t won anything yet and that’s the reality still. It would be wrong to be celebrating now because we still have to win the league.

“We’ve got a tough schedule and we’re losing players as well hand over fist. There are a lot of tired bodies in there. John Mountney came off, his back seized up, Chris Shields came off with a groin injury. Stephen O’Donnell is out with his hamstring.”

“This is what happens when you play fellas every two or three days over a period. It just can’t be done. we were tired tonight,” he added.

“Patrick McEleney gave us a real spark and it’s special for him. He wants it badly, he came down from Derry to win a league title and he’s determined to do it. He gave us a massive spark.”

If Dundalk on and claim what would be the club’s 12th league title, Kenny believes it should be as one of the most special.

“A few teams have won two league titles over the years but to win three has proved elusive for many,” he said.

“For us to go and try and win three would be special, it would be , really special. Considering we’ve got to the Europa League and had a few results on the back of European nights that went against us, Galway and Bray in that period. For us to win the league as well would be really special.”