Champions elect! Dundalk one win away from the title 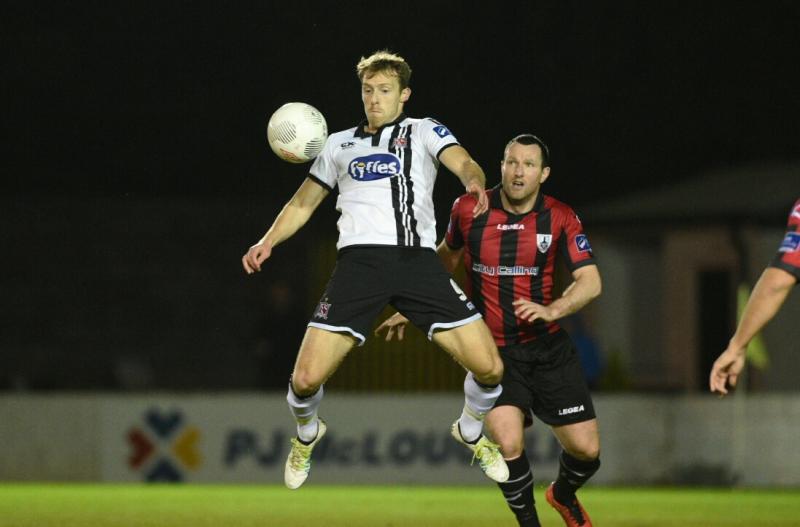 Dundalk enjoyed a stroll on the Strokestown Road as they brushed aside the challenge of struggling Longford Town to put one hand firmly on the SSE Airtricity League title.

Longford Town substitute, Eddie Dsane, must have wondered what all the fuss was about when he entered the fray as a 71st minute substitute to raucous cheers from the Dundalk fans.

Little did he know that 73 miles away in Dublin, Sam Verdon had put St Patrick’s Athletic 2-1 up against Cork City. Conan Byrne’s last minute penalty condemned The Leesiders to a defeat that all but ends their title hopes for another year.

Put simply, Dundalk are seven points clear with three league games to play, starting with a home game against Bohemians on Sunday night. If they win, they will be crowned champions for the third season on the trot and the 12th time overall. They are on the brink.

Speaking after the 2-1 success over Cork City six nights earlier, Stephen Kenny said that retaining the league title was his main objective and his team selection certainly backed that assertion up.

Despite an impending Europa League meeting with Zenit St Petersburg, Kenny made just one change to the side that beat Shamrock Rovers with Chris Shields coming in for hamstring victim, Stephen O’Donnell.

Dundalk started on the front foot with Ryan Coulter bolting from his line to gather from David McMillan inside 30 seconds. Brian Gartland then met a John Mountney corner but couldn’t get any pace into his attempt.

Patrick McEleney buzzed with intent early on and a surging run on the left ended with his dangerous cross put behind by Conor Powell. Dane Massey met John Mountney’s corner but Coulter gathered safely.

Massey fared much better from close to 35-yards on the quarter hour mark. Alan Keane won possession on the right and slipped the ball inside for his fellow full-back to drill low into Coulter’s bottom left hand corner to claim his second goal in four days.

John Mountney limped off six minutes later and his replacement, Darren Meenan, almost made it 2-0 just past the half hour mark. The excellent Keane raided down the right again, his cut back finding Meenan, 20 yards out, but he pulled his effort wide of the target.

Longford knew that anything less than a victory would see them relegated but they struggled to make an impression. Their only chance of the half came in the 36th minute when Kealan Dillon’s 30-yard effort was expertly pushed wide by Gabriel Sava.

Dundalk tightened their grip on the game three minutes before the interval. Ronan Finn’s pass cut the midlanders’ back four open and McMillan angled a superb drive past Coulter to bring his tally to 16 league goals for the season.

The champions elect were in cruise control throughout the second-half but they had chances to add to their haul with McMillan hitting the post from a Meenan cross.

In the end, they bagged only one more, Daryl Horgan entering double figures with a comical goal in the 48th minute when Conor Powell’s attempted clearance hit off the winger and found the net. When things are going well, they go really well.

All roads lead to Oriel Park on Sunday night for what could be one hell of a party!