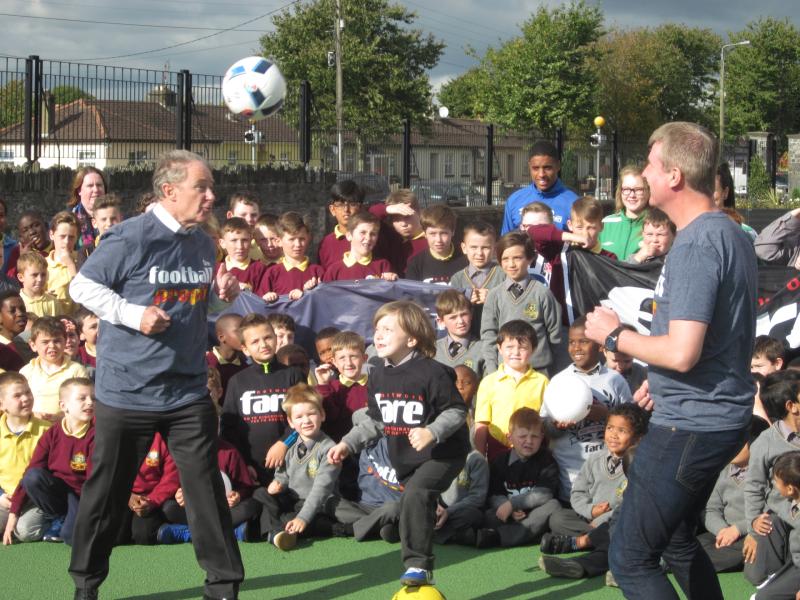 Last Wednesday’s event, which was organised by Sports and Racism in Ireland (SARI) and FARE (Football against Racism in Europe), was one of many events held all over Ireland.

Labelled as ‘FARE #FootballPeople weeks’, the events bring together professional and amateur footballers, football fans and young people on pitches and playgrounds up and down Ireland to participate in workshops, games and training that challenge discrimination and promote the social inclusion of marginalised groups.

As part of the initiative, residents of Direct Provision Centres (DPC’s) have an opportunity to train with SSE Airtricity League teams such as Dundalk FC. For the third year in a row, the club is showing its support for the initiative by hosting training and games.

“FARE #FootballPeople weeks is a really unique way of uniting people and I am very happy to be here today and see how young people are willing and excited to understand how we can all play our part in promoting social inclusion,” said Lilywhites boss, Stephen Kenny.

His comments were echoed by Kerr, who is also a SARI Director: “SARI is very grateful to Stephen Kenny for his role in driving awareness of this nationwide initiative.

“Bringing together sports clubs with residents of DPC’s may seem like a very small thing to do but it can have a powerful knock-on effect and can make a gigantic difference in people’s lives.

“The limited resources afforded to residents of DPC’s can be isolating and therefore the generosity of clubs like Dundalk FC, who host games, provide facilities, get stuck into training with the residents, breaks down barriers, lifts spirits, improves mental and physical health and ultimately unites people.

“It is a testament to the unique ability of sport to drive social inclusion.”

As part of FARE #FootballPeople weeks, which is a European-wide initiative, SARI coaches will be travelling nationwide delivering football training sessions incorporating anti-discrimination workshops to children aged 11-14. Schools and groups can log onto www.sari.ie to find out how they can participate.

If your community, school or organisation would like to take part in this then please contact info@sari.ie.