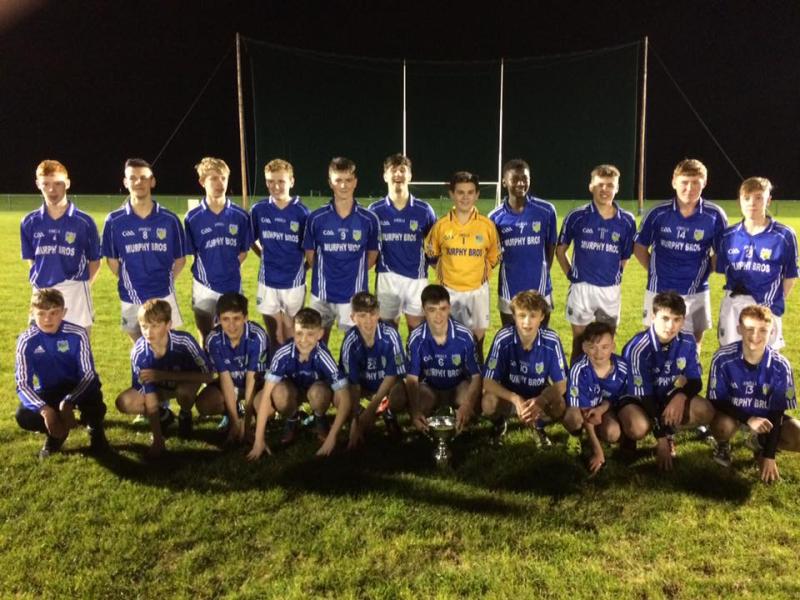 Roche Emmets recorded their 11th consecutive league victory of the 2016 campaign to win the U16 Division 3A league final in an exciting game against the Naomh Fionnbarra\Lannleire combination side.

Roche enjoyed a promising start and took the game to their opponents with Andrew Byrne firing the first score of the match over the bar. However, after ten minutes it was the combination side who led by 1-0 to 0-1.

The Roche half forward line of Gerard Browne (0-1), Glen Stewart (0-1) and Ryan Watters began to cause all sorts of problems for the opposing team with their direct running and link up play.

A goal from corner forward Byrne, two points from half-back Adam McKay and two points from midfielder Ben Kapinga left Roche in a commanding position at half-time, leading 1-7 to 1-1.

The second half was a really tight affair and two goals from the Togher\Dunleer men, in addition to some fine saves from their goalkeeper, brought them to within a point of the Faughart men.

They threatened a great comeback but Roche stood firm thanks to  some fantastic defending from their full-back line of Peter Lynch, Ronan Bailey, Fintan Watters and James McDonnell, in addition to great play from Josh Rice Martin, Sean Dawe, Marc Murphy and Adam Fee.

Roche added a further six points to their first half tally through Marc Murphy (0-1), Andrew Byrne (0-1), Ben Kapinga (0-2) and Eoin Johnson (0-1). Paul Hamill then rounded off the scoring with virtually the last kick of the game.

Other excellent performances on the night came from Scott Carthy and James McArdle, with Devan Callan, Liam O’Donnell and Aidan up the rest of the victorious team.

This crowned off an excellent week for Roche having secured the U14 1B League title only seven days earlier at the same venue. No less than eight of those lads were also members of the U14 squad.