Haunting tale from 200 years ago 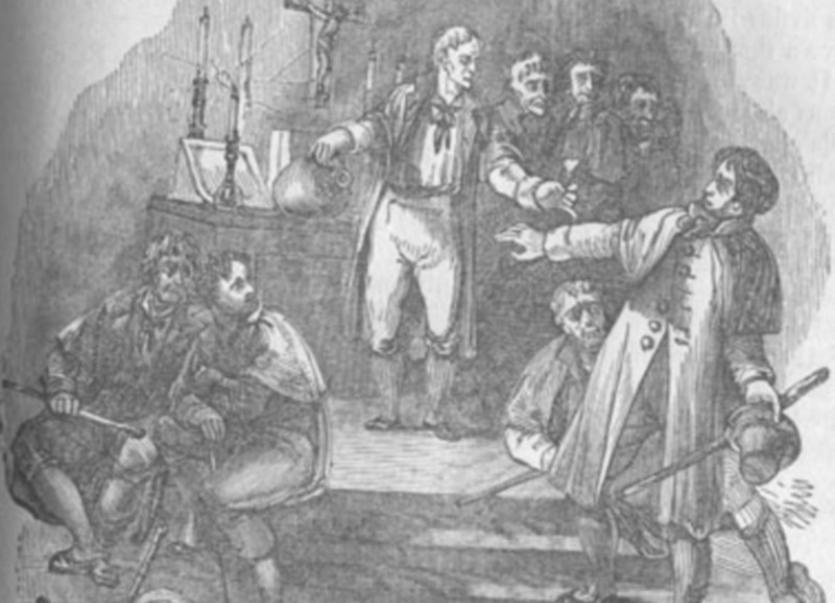 We are fast approaching the bi-centenary of an event that left its mark on the North Louth area and, indeed, of all of Ireland at a time of great change for the country. It was an incident that took place in a remote part of County Louth, near the County Monaghan border, which is even now difficult to reach, on the night of October 29/30, 1816, which came to be known as 'The Burning of Wild Goose Lodge'.

Basically it is a tale of agrarian unrest in Ireland in the post Act of Union Ireland which culminated in the Great Famine of 1845. Events like this were happening all over the island during the period but this one stood for the sheer horror and scale of the crime and retribution which resulted in the unnatural and cruel deaths of upwards of 40 persons, many innocent of any involvement in the crime, and the sufferings of many others as a result.

There have been several books and many academic papers published over the past 200 years about the atrocity and its aftermath. Recently a play was written by local solicitor Paul McArdle, which, I understand, has been turned into a T.V. documentary film is due to be broadcast about the time of the 200 anniversary. The rights and wrongs of what happened on the fearful night and afterwards has been the subject of much debate over the past two centuries. It was an event which has been turned into a political battleground between nationalists and the supporters of the landed classes who ruled our country in the eighteenth century, which have lasted into present day Ireland. Above all, however, it is a tale of mystery which has never been fully resolved for all the documentation studied by the academics and possibly never will be!

The man responsible for the creation myth, mystery and even romance surrounding the story was William Carleton whose own life was itself a bit of a mystery. He was born in County Tyrone in 1794, just before the 1798 Rebellion and lived until after the Famine, dying in Dublin in 1869. In between those two dates he had a a very chequered career, some say that he was ordained as a Catholic priest but ended up being a Protestant minister and his religious and political affiliations are very much a matter for conjecture. It is for his writings, however, that he is best remember and his 'Traits and Stories of the Irish Peasantry', first published in 1830, even if much of it is fictitious, give one of the best insights into the lives of the ordinary Irish people in the pre-Famine era!

Carlton's contribution to the 'Wild Goose Lodge' story is that he published an account in the Dublin Literary Gazette in 1830, entitled 'Confessions of a Reformed Ribbonman', which pro-ported to be the true story of what had happened on that fearful night in 1816. Most critics regard the story as a work of fiction but it is based on fact and the lurid tale so caught the imagination of those read it that it was translated into several languages and was widely distributed over Europe and North America.

Carleton did have an intimate connection with the area in that he lived there very shortly after the event and, apparently, was told the stories about it by a local priest Fr. Edward McArdle, with whom he had stayed. He also walked the district while employed as a tutor to the family of a local wealthy farmer, Piers Murphy of Stonetown, who still has many relatives living in the North Louth and Dundalk area. Some of the claims Carleton made about seeing gibbeted corpses swaying in the wind could just not have been true but he may seen the remains of the alleged ringleader of the Ribbonmen hanging from a 30 foot pole erected at Corcreaghy village and guarded, for time, by an armed sentry. Patrick Devan's corpse hung for 22 months before being cut down, as a warning to the local people by the magistrates of the County who were still fearful of the events that took place in 1798.

William Carlton's story makes great reading, if you can lay yours hands on a copy, but you should not take it as anything much more than a work of fiction! The best, and most readable, account, in my opinion is the book published by Terence Dooley, from the Carrickmacross area, which is still readily available from bookshops and probably can be obtained on-line. It was published in 2007 and is called 'The Murders at Wild Goose Lodge'. Keep a look-out also for the upcoming television film, which I am told, is very well produced!

Over the past fifty years I have read every everything I could lay my hands written about the Wild Goose Lodge story, and was enthralled by Paul McArdle's play. I have also listened to many stories from local people and others, including my old Editor, Frank Necy. Older people from the district were not inclined to talk much about the incident, mainly because members of their own families had been involved and old, bitter memories are very slow to fade from the folk memories. The fascinating story has been opened up greatly, however, over recent generations and I would like to come back to some of the stories about the events of the time which have never appeared in print. If I am permitted by time and space to do so!