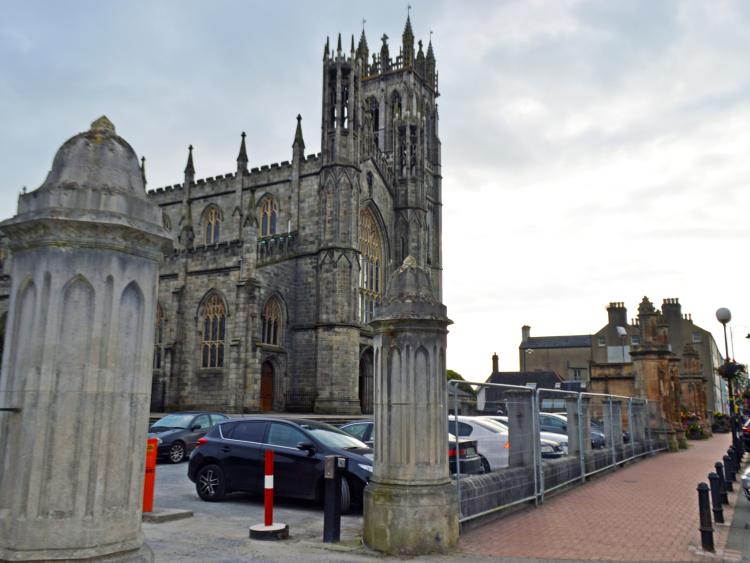 Local snapper Darran Rafferty took a shot of ongoing refurbishment work on the railings and facade at St Patrick's in Dundalk this afternoon.

It appears that the railings have been removed along with a significant part of the structure at the front of the church.

St Patrick's is built of Newry granite and was designed in the style of King's College chapel, Cambridge. Its style is pointed Gothic. Inside, St Patrick's measures 144 ft. x 72 ft (44m x 22m). It has one long nave and 2 aisles, finely chiselled granite pillars and a "ribbed vaulting" type of roof which was inspired by English  Monastic architecture. Exeter Cathedral is thought to have provided the inspiration for the interior of St Patrick's.

ln 1910 the commemorative tablets to Dr. Coyne & Archbishop Kieran were erected. Many iprovements were effected by Fr. P. Lyons (Adm. 1910 -1915). The original floor was of large Yorkshire flagstones. These were sold to Maynooth College and replaced by a wood block floor. He also provided the new terraced approach to the church in 1914.
In 1937 the sacristy, meeting rooms and stores were built to the plans of W.H. Byrne & Son by James Wynne & Co., Dundalk. Include in the scheme was a new bridge over the Rampart river. The extension is in the same style as the church and built of Newry granite. The cost was £14,000. In the same year a new mortuary chapel was provided on the ground floor of the campanile, where previously the baptistery was located.