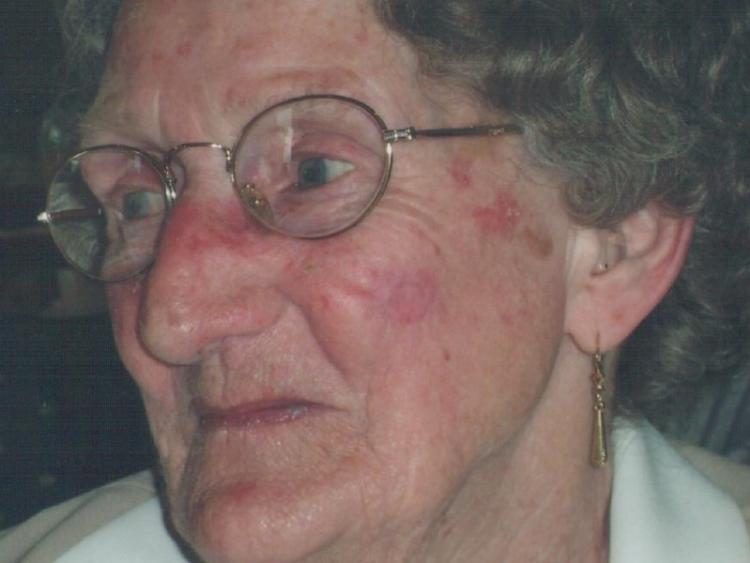 Kathleen Tuite of Saint Clement’s Park Dundalk whose death occurred on September 10 last was the last surviving sibling in her family, and a lady who was heavily involved in the Point Road community where she was very fondly regarded.

She was very hard working and had hands to do virtually anything, but was exceptionally gifted at knitting and crochet and utilised those gifts for the benefit of her family and will be remembered for her trademark chimney sweep dolls.

In her 97th year she was one of the eldest surviving residents in the estate, having with late husband Patrick being among the earliest to move into the house occupied by her brother Willie when the latter’s wife died. The couple raised their four children, Brendan and John and daughters, Mary and Olive there, and became integral members of the local community.

Patrick was involved in the local Redemptorist Church where he was a collector until he died. He and Kathleen used to go on the locally organised pilgrimage to Lourdes.

Kathleen stayed at home after her marriage to run the family home and care for her husband and children. But she gave her spare and leisure time to helping out in the Point Road Community Centre assisting with the senior citizens club and with the Majorettes Group, which was highly popular with the young folk in the area

She and husband Patrick also helped in fund raising for the Christian Brothers primary school in the running of such events as the school bazaar.

Kathleen was one of six children of the late William and Mary Moore, comprising three other daughters, Olive, Cecilia and Nora and two brothers, Willie and Charlie. She was born and raised in Mary Street North, and attended Realt na Mara School before entering the world of work with the shoe trade offering one of the main employment opportunities then. She joined Hallidays factory where husband Patrick was employed all his working life. He hailed from closeby from the Point Road.

After their marriage they resided for a time in Saint Mary’s Road before moving to Saint Clement’s Park. They enjoyed ballroom dancing in the local halls that hosted sessions at the time. At a later stage they also liked taking part in indoor bowls staged in Saint Gerard’s hall.

However, Kathleen’s main leisure activities were embroidery, her knitting and crochet making, at which she also worked hard at home to supplement the family income and reduce the cost of their clothing. For she was a dab hand at making jumpers and Aran sweaters , and her work was of such high quality that she used to knit and supply school jumpers for the former James Dearey & Sons department store in Clanbrassil Street which was taxing. She also made Christening shawls and jackets and whole wedding dresses, including the dress for her daughter-in-law, Maureen’s Big Day. She also found time to make dolls as wedding presents to brides she knew and to present to all the priests who visited her home.

She struck up a very close and mutually fond relationship with Father Michael Cusack CSsR who visited her every First Friday of the Month. He joined in singing her favourite verse, taught to her by her father.

He recited the lines in a touching eulogy during her funeral Mass.

Kathleen loved music, and had a sizable collection of CDs containing all genres, but her all time favourite artistes were Nelson Eddy and Jeanette MacDonald. She possessed a fine singing voice and enjoyed a sing song, and coupled with that engaging in craic with her fine sense of humour.

Her health deteriorated in the last year and it was necessary she receive full-time care, and became a resident in Carlingford Nursing Home. Her family are deeply grateful for how content she was and for the level of care she received.

After Reposing at Shevlin's Funeral Home Barrack Street on Saturday and Sunday, Kathleen was removed on Monday morning to Saint Joseph's Redemptorist Church.

Father Cusack celebrated Mass in which family members took part, principally her grandchildren and great grandchildren. The music was provided by singer Andrea Delaney and Trevor Clarke on the organ