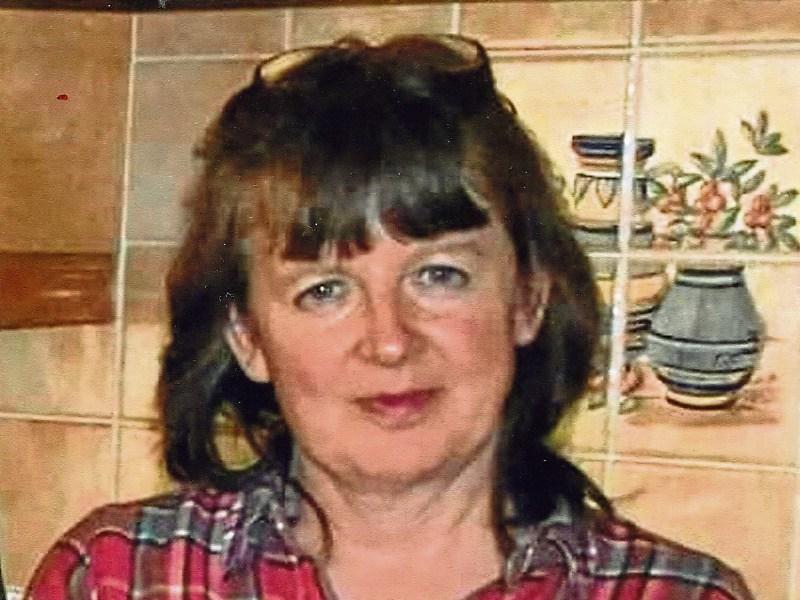 The death of Bridget Peacey (nee McArdle) just two days after her 59th birthday from an illness she bore with outstanding courage, humour and dignity, has left a huge void in the lives of all who knew her, particularly her family and her seven nieces and nephews who will greatly miss their ‘perfect aunt’.

Bridget, who died on August 30, was known for her independence, fortitude and bravery which she showed every day of her life and spent her career as a psychiatric nurse, caring for people right up to a few months before her passing.

Originally from Mullavalley, Ardpatrick, Louth Village, Bridget was the only daughter of the late John Joe and Ettie McArdle, and was the second child of the family. She grew up with her brothers, John, Vincent and Martin and attended Louth National School before completing her Leaving Certificate at Dun Lughaidh.

For a short time after her Leaving Cert, she worked in Clark’s shoe factory before she went to England where she put her considerable intellect to studying psychiatric nursing in Essex.

After she qualified, she worked for 14 years at Claybury Psychiatric Hospital in England.

She returned to County Louth after that, where she worked at St Bridget’s Hospital in Ardee before moving to the Moorings Psychiatric Unit and later, the Ladywell Centre in Dundalk. She loved working with staff and patients but decided to take a career break and again took to learning new skills, completing a course in beauty and sports therapy with the renowned Fernanda Scappaticci school.

Bridget ran her own part-time business from her home in Cluan Enda, providing therapy to many clients and it was a time in her life she very much enjoyed.

However, she was drawn back into psychiatric nursing and returned to work at the Moorings, before taking up a post with the Solasan residential unit on the Dublin Road campus of the Louth County Hospital.

She remained there for 12 years, caring for patients, until earlier this year when she retired on the grounds of ill health.

Her family, particularly her much loved nieces and nephews, provided a great source of joy for Bridget all her life and Bridget was the perfect aunt.

A great fan of Hello! magazine, Bridget ensured she gave all her family and friends the Hello! treatment, making them feel special and unique.

She involved herself in all stages of the children’s lives, from bringing home suitcases of toys from England to swimming lessons and nail painting, from her ‘Judge Judy’ court sessions to her relaxation techniques. She always supported her nieces and nephews, believing in their abilities, opening their minds, enriching their lives with her unique view of the universe and her love of new things.

She found love and companionship ten years ago with John Fox from Tallanstown, who cared and supported Bridget right to her death.

Unfortunately, Bridget was diagnosed with cancer five years ago and faced the battle ahead with a positive and inspiring outlook.

Despite her courage, the cancer returned and she learned of her diagnosis on the morning of her father’s funeral, just a year ago. She became a founder member of the Cara Cancer Support Centre in Dundalk.

Having learned to live with her prognosis, Bridget got her wish to die in the home she grew up in at Ardpatrick, surrounded by her loving family.

With her death, her family, John and her many friends have lost a tour de force, a positive and enlightening influence in their lives who will never be forgotten.

Having reposed at home, Bridget was removed to the Church of the Immaculate Conception in Louth Village for funeral Mass, celebrated by her cousin, the newly-appointed PP, Fr Sean McArdle, assisted by former PP Louth Village Fr Sean Quinn and army chaplain Fr Bernard McKay Morrissey.

A moving tribute was given by niece Geraldine Tasic, while the beautiful singing and music was provided by David Martin and Brendan McCourt. Burial took place afterwards to adjoining cemetery.

Month’s Mind Mass took place on October 1 at the Church of the Immaculate Conception, Louth.