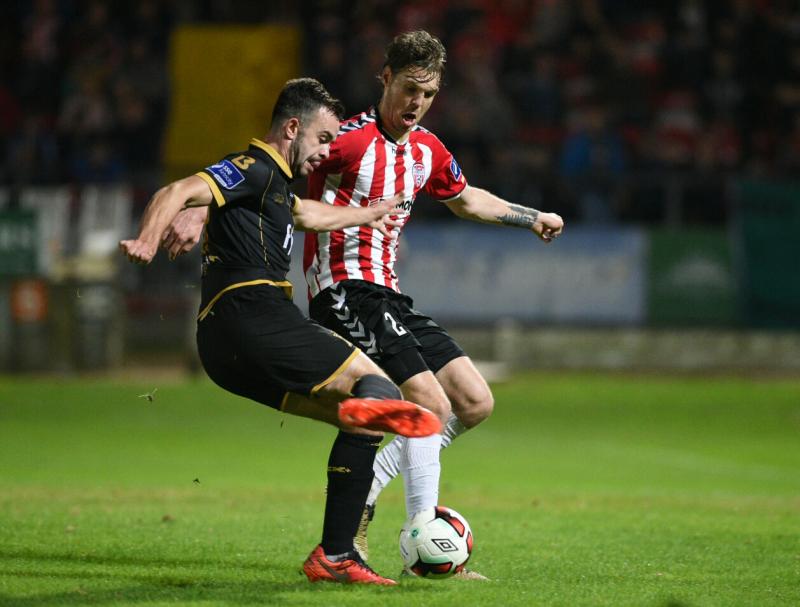 Gavin McLaughlin at The Brandywell

Three days after they they face Zenit St Petersburg in a Europa League tie in Russia, Dundalk will meet Cork City in the FAI Cup final at the Aviva Stadium.

For once, it’s an extra fixture that will bring delight, as opposed to despair, to Lilywhites manager, Stephen Kenny, whose side are still on course for an unprecedented double double.

Goals from Ciaran Kilduff and Ronan Finn secured their passage to the final, a repeat of last year’s showpiece, after Derry City had threatened an upset when Ronan Curtis opened the scoring in the third minute.

Both managers freshened things up from the 2-2 draw two days previously with Derry City manager, Kenny Shiels making three changes. His opposite number made five.

There was an air of expectancy inside The Brandywell before kick-off and that belief grew when the hosts took the lead after just three minutes of play.

Paddy Barrett was hustled brilliantly on the left side of his penalty area by Harry Monaghan, allowing Barry McNamee to take possession and drive away from Robbie Benson.

The midfielder had options in the centre and he chose correctly, Curtis darting towards the near post to sweep past Gabriel Sava and score his third goal is as many games.

Dundalk took time to settle but even though they started to control possession a wild John Mountney effort in the 10th minute was all they could create as the game ticked past the midway point of the half.

Derry carried a threat when they went forward and a well worked McNamee corner in the 23rd minute, rifled over the top by Aaron McEneff, drew a warm round of applause from the home support.

The mood darkened eight minutes before the break, though, when Dundalk restored parity. Benson, who tried to break behind enemy lines on a number of occasions, was tripped by Niclas Vemmelund, leading to fifth official, Paul Tuite, to signal for an infringement. Referee, Dave McKeon pointed to the spot and Kilduff made no mistake, taking him into double figures for the season, and sending the teams in level at the interval.

Kenny introduced Daryl Horgan for Benson at the break but it was the natives, with 19-year-old, Ben Doherty, providing a good outlet on the left, who started the second-half on the front foot.

Just seconds had elapsed when Curtis forced Sava to parry a well crafted effort. Unlike Sunday, there was nobody in a red and white shirt to capitalise on the loose ball.

Kilduff limped off in the 64th minute with a knock. He was replaced by David McMillan, who scored a hat-trick in Dundalk’s 5-0 league win here in July and the winner arrived three minutes later.

After falling out of favour in recent months, Darren Meenan did his prospects no harm with a decent showing and, yet again, he provided the assist, crossing from the right for Finn to divert a fine header inside Doherty’s post.

Derry pushed for another leveller but Dundalk, with Brian Gartland outstanding at the heart of their back four, held out to set up a mouth watering showdown with their nearest rivals on November 6.