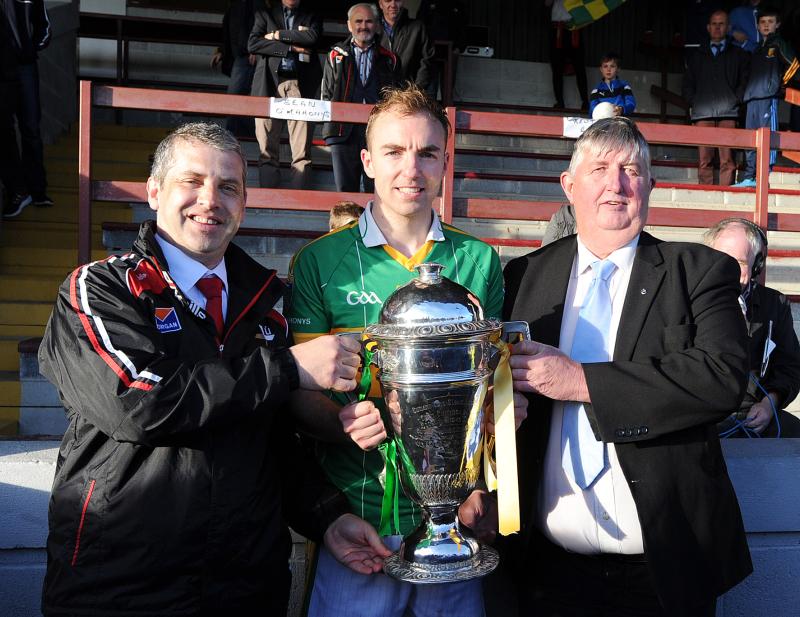 Dalton McNamee at The Gaelic Grounds

A late flourish in the final 15 minutes of a dramatic Louth Senior Football Championship final helped the Sean O’Mahonys claim the Joe Ward for the first time in the club’s history.

With 49 minutes and six seconds on the clock, St Marys’ Ronan Carroll kicked over a point to put his team 1-9 to 0-8 ahead. At that stage, the men from Ardee looked a good bet to end their 21-year wait for senior success.

However, the O’Mahonys, who were desperate to avoid losing a second consecutive senior final, went up another gear, scoring 1-3 without reply to take the trophy back to Dundalk.

You need a bit of good fortune to win a final and Lady Luck was definitely smiling on the right at the death when a long, surging ball from man of the match Conor Finnegan seemed to disappear in a congested square before reappearing in the back of net with full forward, Conor Crawley, taking the credit.

Ardee will no doubt rue kicking seven first half wides as well as some needless fouling in their backline which was punished by Finnegan, who capped a fine display by hitting six points. Indeed, what would the Mary’s have given to have been able to call upon the services of injured forward, and key man, Alan Kirk?

Blue and white flags were the first to flutter as Carroll got the ball rolling after two minutes before Mark Fay fisted over after good work by Dean Matthews.

A hat trick of unanswered O’Mahony’s points courtesy of Conor Finnegan, Stephen and Liam Dullaghan, after good approach play by John O’Brien, put the Seans ahead.

Dean Matthews traded scores with Conor Finnegan following a foul on the hard working Conor Martin before another well hit dead ball from the excellent Finnegan put the O’Mahonys two points ahead. Matthews, who caused endless problems for his opponent, Michael Clarke, shortened the deficit.

St Mary’s were denied a goal just before the break when O’Mahony’s netminder Kevin Brennan brilliantly denied Matthews. From the resulting ’45, Ronan Carroll scored from play before Clarke edged them ahead, 0-6 to 0-5.

The experienced Darren Clarke opened his account early in the second half but the Mary’s forward saw his effort cancelled out moments later by a magnificent point from distance by Finnegan. The same player then converted a ’45 to put his side ahead.

The pendulum began to swing in the Marys’ favour after that. Dominating the middle of the park by winning five out of the next seven kick outs, the likes of Niall Eccles, Robert and Dáire McConnon began to work hard for the Ardee cause.

And it was the result of interplay between Carroll and Eccles which led to Mark Fay taking the ball off the shoulder before crashing it superbly past Kevin Brennan to the roof of the net. This was followed by a Clarke free and another Carroll point to increase St Mary’s lead to four, 1-9 to 0-8.

The O’Mahony’s are known for their ability to dig deep, however, and they showed their resilience, yet again, when it mattered here.

With 10 minutes left on the clock, they stood up to be counted and for the rest of the game they took over, winning seven kick-outs in a row with Liam Dullaghan and substitute Niall McLaughlin contributing heavily to that tally.

Three scores on the bounce, a free from Finnegan and points from Dullaghan and Ronan Byrne left just the minimum between the sides, 1-9 to 0-11 with 55 minutes played.

The decisive twist in a thrilling game arrived four minutes later when a long ball from Finnegan was met by Conor Crawley, the ball nestling into the roof of the net, sparking roars of delight from the O’Mahony’s faithful.

Despite Ardee’s best efforts, they just couldn’t muster a goal of their own to retrieve it and referee Stephen Johnson’s final signalled a swarm of green and gold clad, ecstatic O’Mahony’s supporters to invade the pitch in celebration.

Twelve months on from their defeat to St Patrick’s, the Quay is well and truly alive and it’s safe to say it’ll be Mardi-Gras time on the Point Road for the next couple of weeks!