Kenny upbeat despite seeing a two-goal lead slip away

Lilywhites must travel to The Brandywell on Tuesday night 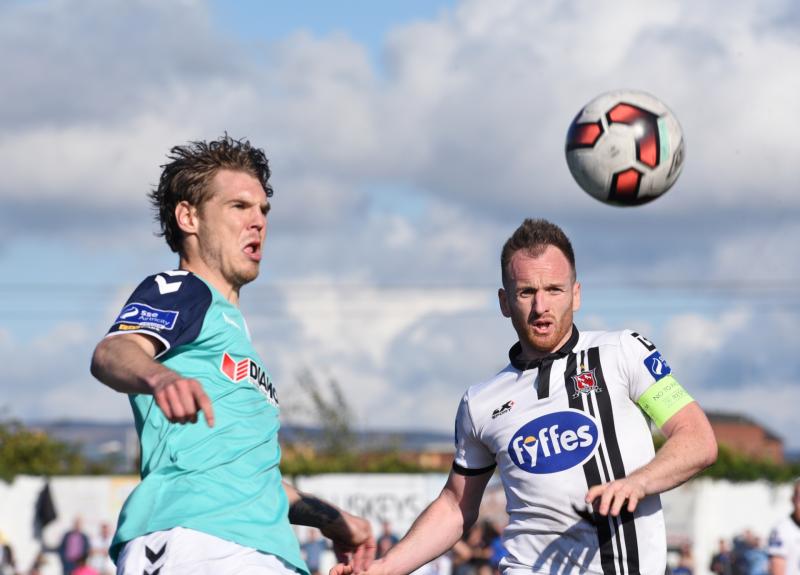 He may have watched his side surrender a two-goal in their FAI Cup semi-final tie with Derry City on Sunday but Dundalk manager Stephen Kenny was upbeat when he spoke to the press after the game.

Dundalk looked set for a place in the final when they went down the tunnel at half-time leading 2-0 but The Candsytripes hit back after the break to force a replay at The Brandywell on Tuesday night that nobody at Dundalk would have wanted.

“Nothing in life is easy,” said Kenny.  “You don’t just steamroll to a double-double, it doesn’t happen like that. You have to go through an epic number of games, you have to be resolute and show immense character.

“We’re disappointed that we were 2-0 up and conceded two goals, which is not like us. We made a few changes and we just wanted to win the game and I thought we did enough to win it. We had good chances to go 3-0 up, we hit the post and then we conceded the two goals which we could have done better on.”

The result means that Dundalk the daunting prospect of having to play eight games in the next 26 days leading Kenny to once again raise the possibility of an extension to the season.

“Personally, I don’t see why the season can’t be moved to the Sunday (October 30) or the Bank Holiday Monday (October 31). Either that or add another week which should be organised anyway.

“I understand there’s a price for success but you shouldn’t be punished for it. It’s only humanly possible to play so many games.”

Kenny said that Dundalk had already presented a case to the FAI to extend the campaign but he hinted that the Dublin Marathon, due to be held on October 28, had proved to be an obstacle.

“It has been mentioned that the SSE Airtricity Dublin Marathon is on but you can’t be putting sponsors before players. Player welfare is more important that sponsors’ welfare.

“We’re involved in a proper marathon,” he added. “That’s a great event and I wouldn’t take away from it but it shouldn’t really affect when our season starts and ends.”

The Dundalk manager made eight changes to his side for Sunday’s encounter but he said he would have to look at his options before selecting a team for the replay.

“I need to think about it,” he said. “Stephen O’Donnell is suspended and we have one or two who are struggling for Tuesday. I’m waiting to hear on Dean Shiels but I don’t think anything is broken.

“We’ll just have to go again and manage our resources,” he added. “We’re disappointed but we’re not disconsolate. We just need to manage our recovery for Tuesday and find the strength and determination to go up there and try and win the game.

“We’re still in the cup and it’s better than being out of it. We’ve won in Derry this season and playing away from home doesn’t hamper us.”