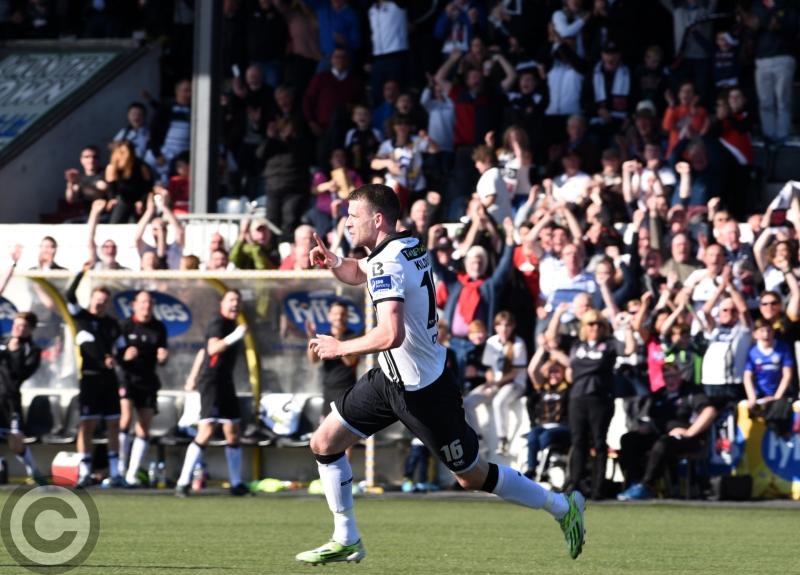 Substitute Ronan Curtis came off the bench to rescue Derry City’s FAI Cup hopes and add yet another fixture to Dundalk’s punishing schedule.

Two goals to the good at half-time, Stephen Kenny’s side had one foot in November’s final at The Aviva Stadium but The Candystripes refused to buckle and goals from Rory Patterson and youngster Curtis, four minutes from the end, stunned the home support.

It means the sides will meet again at The Brandywell on Tuesday night which has not gone down well with Derry City manager, Kenny Shiels.

“As far as I am concerned, if the game is Tuesday, then we can’t play it. We have three players - Conor McDermott, Ronan Curtis and Josh Daniels - away on international duty so we should call it off.”

There should certainly be some interesting discussions in the Shiels household over the next few days after Kenny’s son, Dean, opened the scoring for Dundalk in the 21st minute.

Alan Keane, one of eight changes to the Dundalk side that beat Maccabi Tel Aviv in Tallaght on Thursday night, broke on the right before turning a vicious ball across the face of goal for Shiels to head home under pressure from Niclas Vemmelund.

It proved to be a bittersweet moment for the Northern Ireland international whose bravery resulted in him sustaining an arm injury that saw him withdrawn before play restarted.

The goal knocked Derry City out of the stride. The visitors started confidently with Barry McNamee squandering an early opening and Rory Patterson seeing a downward header clawed away by Gabriel Sava.

And they were left with an uphill task when man of the moment, Ciaran Kilduff, latched on to Patrick McEleney’s delightful pass to fire home his second goal in the space of four days in first half stoppage time.

Kilduff almost put the result beyond doubt in the 50th minute, his header from another pinpoint McEleney cross coming back off Ger Doherty’s post with the goalkeeper beaten.

Derry, however, never threw in the towel and Keane somehow managed to divert a Curtis cross to safety before Patterson could apply the finishing touch in the 59th minute.

The Strabane hitman dragged his side right back into the game six minutes later. Aaron McEneff’s drive took a deflection off Shane Grimes. Sava could only parry the ball back into play and Patterson reacted quicker than anyone to tap home.

That set the alarm bells ringing amongst the home support and the equaliser arrived with four minutes left on the clock. Dean Jarvis’ free-kick from inside his own half dropped over the head of Keane and Curtis was able to control the ball and come inside Paddy Barrett before lashing a right footed half volley past Sava to put a dent in Dundalk’s hopes of a second consecutive league and cup double.

“Nothing in life is easy,” said Lilywhites boss, Stephen Kenny.  “You don’t just steamroll to a double double, it doesn’t happen like that. You have to go through an epic number of games, you have to be resolute and show immense character.

“We’re disappointed that we were 2-0 up and conceded two goals, which is not like us. We made a few changes and we just wanted to win the game and I thought we did enough to win it. We had good chances to go 3-0 up, we hit the post and then we conceded the two goals which we could have done better on.”

The replay means that Dundalk face the daunting prospect of having to play eight games in the next 26 days leading Kenny to once again raise the possibility of an extension to the season.

“I understand there’s a price for success but you shouldn’t be punished for it. It’s only humanly possible to play so many games.”