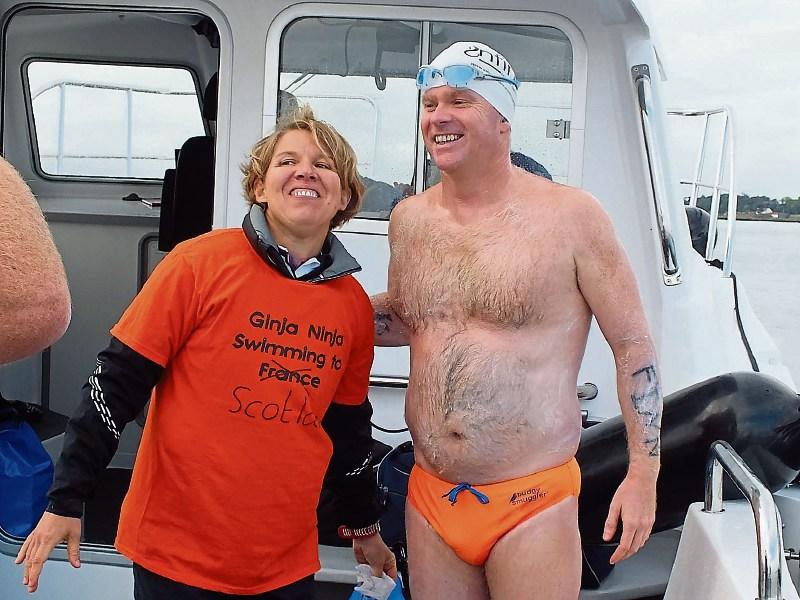 AUGUST was a great month for Irish open water swimming. On home soils, (or waters) two records were created by husband and wife Keith and Oonagh Garry, from Blackrock.

On August 14th, Keith Garry completed the ultra marathon swim, ‘The North Channel’ by swimming from Ireland to Scotland in a time of 9hours and 57 mins, beating the previous male record of 10 hrs 32mins, which was held by Miko Klerx from the Netherlands.

Keith was piloted by Padraig Mallon of Newry based Infinity Channel Swimming, himself a successful North and English Channel swimmer.

The swim is 21 miles long in temperatures of 12-14 degrees Celsius and is approximately the same distance as the more familiar English Channel, however, has more natural obstacles as well as much colder temperatures which can greatly influence performance.

The North Channel has seen growing interest in the open water swimming community as it is listed as the most difficult swim in the famed and notorious Oceans 7. A series of 7 channel swims around the globe, akin to the 7 summits of mountaineering. Keith is delighted to have ‘ticked it off’, never mind having set a new male record for the swim as he embarks on his journey to complete the 7.

He is especially relieved as the day before his swim, two other international swimmers from Hungary and India were pulled from the water within a mile from the Scottish shore. Both have recovered from the hypothermia and loss of consciousness that ended their respective swims.

Two weeks after Keith’s swim, his wife Oonagh set off on her own challenge. This time as a member of a relay team made up of her counterparts from the Donegal Diamonds Belfast Waterpolo team.

Donegal Diamonds divided into two relay teams and set out to race across the North Channel in the first ever double relay race of its kind.

Channel Swimming Crazies (Oonagh’ s team) and Donegal Deadlies set off from Donghadee at 4am on Aug 25th.

In pitch darkness, with light strobes and glow sticks strapped to their swimming costumes, they set off. The first swimmers, unable to see them through the thick blackness, encountered a number of deadly Lions Mane jellyfish, which this year, have been seen in extremely high numbers in Irish waters.

As daylight broke, the other team members took turns with a whistle at the front of the boat in an attempt to warn the swimmer in the water of the deadly enemies. Often a futile effort! The relay teams were blessed with good weather conditions and each swimmer managed to maintain an impressive and consistent pace throughout. Flat calm seas and sun breaking through clouds helped maintain the good mood despite the stings.

The crew tended to each other after each relay leg scrapping off live jelly fish tentacles and applying shaving foam in an attempt to relieve the stings.

Spirits were lifted by a pod of porpoises that played not far from the boat. Half way through the swim, Oonagh and Pilot, Padraig came to the realisation that a record was on. The girls who were already putting everything into the swim, were asked for more.

They dug deep to find every last bit of energy, panting as they came out of the water after sprinting for a full hour. It paid off and in a time of 9hours 55 they touched Scottish shores. Taking 23 mins of the previous record, set by an American team. The Donegal Deadlies were not far behind, finishing in a time of 10 hours 20 mins.

All found the strength to begin their celebrations with a short and impromptu game of waterpolo underneath the lighthouse at which they touched down on the Scottish Coast. Keith was back on dry land to greet Oonagh, with their two sons Oisin (9) and Finn (8) to celebrate the homecoming with friends and family of both teams.

There were many invitations to the boys, challenging them to break their Mum and Dad’s records. Maybe in a few years.