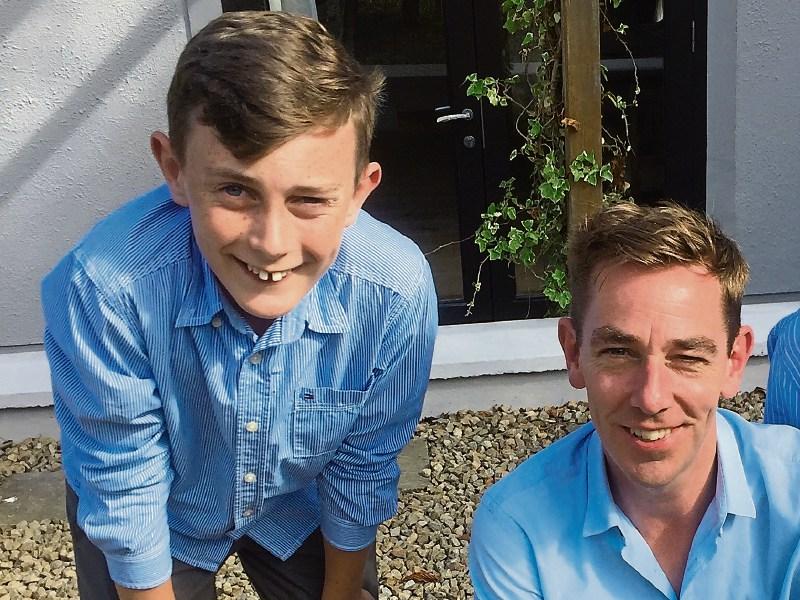 FOR budding vlogger and future television presenter Luke Walsh the chance to interview his presenting idol RTE’s Ryan Tubridy was one not to be missed and like any true professional the Blackrock school boy admits to using all his connections to secure the high profile interview!

“Ryan’s Mum is my Grandads only sister. I was thrilled that he agreed to the interview especially when he's so busy.

“It was an amazing opportunity, although he's my cousin I haven't seen him in a long time so I was delighted when he said we could do the interview. I really want to be vloger and presenter and I really admire Ryan and his career”.

Having just started first year in Dundalk Grammar School, and with his sights on a career in TV, Luke was eager to pick up some valuable tips for the future.

“Ryan gave me tips on different things including that reading is really important and how important it is to study and listen to the news, locally and Nationally and what is happening around the world so that you are up to date in what happening”

For Luke preparation was key as well as keeping his viewers in mind!

“I thought the questions were questions that my subscribers would be interested in. I thought of questions that I would like to know the answers to and wanted to know how Ryan started in his career and how he has become so successful. I wanted to know what he subjects he studied in school that helped him in his career so that I would know what subjects that I need to become a successful.

“Luke mentioned it several months ago but with Ryan’s schedule it took time to organise.

“ I am beyond proud of Luke and adore his ability to communicate and ask questions. He started about 5 months ago reviewing toys for Smyths here in Dundalk on his Youtube channel and this has built his confidence, which I think is a wonderful trait to have at his age”.

If you would like to see Luke’s interview with Ryan Tubridy it is available for viewing on Youtube where you can also subscribe to Lukes channel - laws toys, he has a Minecraft logo as his icon.