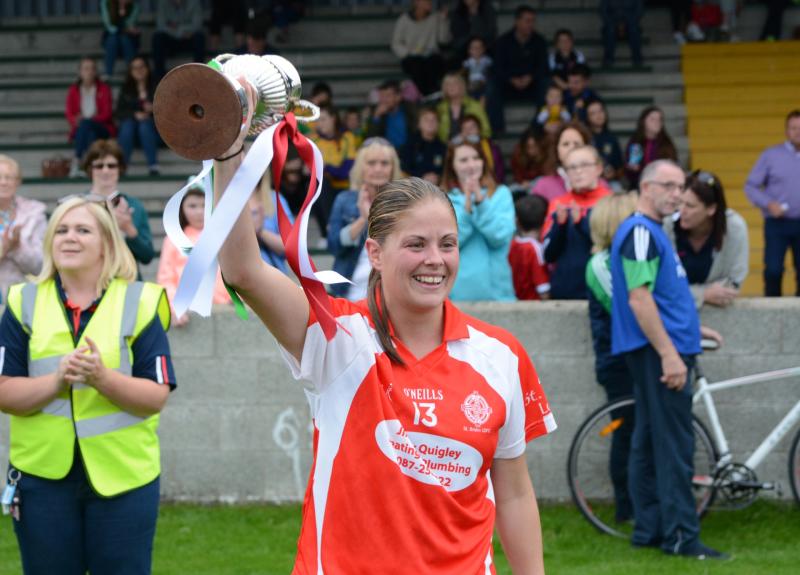 The Louth Ladies Intermediate Championship final provided plenty of thrills and spills with one point separating the teams at the final whistle.

The first half remained close throughout with both teams opening their scoring from frees. For the Brides, Sharon Callan pointed in the first minute with Catherine McGlew replying two minutes later. St Brides restored their lead within a minute when Olive McKenna scored having been put through by Sarah Fagan.

There was no further score until the 12th minute as both teams settled into the game but suddenly there was a flurry of scores.

Callan increased the Brides lead only for this to suddenly spur St Fechin’s into action. They replied with three quick frees from player of the match, Sarah Moore, Ciara Nolan and Catherine McGlew to take the lead for the one and only time.

This was not to last long as Emma McArdle drew the sides level in the 16th minute and Karen Gogarty restored the Brides lead on the 20th minute.

Five minutes later, Emma McArdle increased their lead before Ciara Nolan for the Fechin’s and Sharon Callan, a free, traded points to leave the half time score 0-7 to 0-5 in favour of St Brides.

The second half again saw the Brides quickly off the mark as Callan placed a lovely left footed curler over the bar.

Again, the Fechin's were quick to reply with Hayley McDonnell and Rachel Kinch scoring in quick succession to reduce the Brides lead to a point.

At this stage, the Fechin's were taking the game by the scruff of the neck and continued to keep the ball in the Brides half for most of the second half.

This, however, left them open to the counter and on seven minutes Caoimhe Hoey got the first goal of the game for the Brides as she lobbed the ball over Caoimhe McQuillan in the Fechin's goal.

St Fechin's were forced into a substitution as Rachel Beirth came on for the injured Grace Haughney but the Brides continued to make the most of their chances as the Fechin's were unable to successfully penetrate, with the majority of territory they held, in a game that became strewn with frees as the pressure mounted.

Callan increased their lead to five points in the 11th minute and the Fechin's were forced into a second substitution two minutes later with Anna Redmond replacing Louise McCullough.

Sharon Callan became a thorn in the side of St Fechin’s as she found the net with a 30 metre free and pointed two minutes later to establish a nine point lead for the Knockbridge ladies.

St Fechin's worked hard to get back in the game and reduced the deficit on 21 minutes with a fine goal from Hazel Haughney after good work from Hayley McDonnell.

The Brides made their first substitution at this stage bringing on the experienced Edel McKeown Sloane for Niamh Sweeney but a minute later they were forced to reorganise as Aisling McKean was sin binned for ten minutes.

Catherine McGlew pointed the resultant free to give hope to the Fechin's before the Brides then made two further substitutions with Tara McEnteggart and Sarah McArdle replacing Sarah Fagan and Sheila Tobin.

With the game approaching the end of normal time the Brides’ Aisling McEnteggart was penalised and sent to the sideline for ten minutes as they held on to their five point lead.

The referee played eight minutes of injury time at the end of the game with St Fechin's pressing hard against 13.

The Brides were no sooner back to 14 players when Kate Wynne found herself sin binned as she stopped a Fechin’s attack in the final minutes.

Rachel Kinch pointed from the free and the Fechin's kept the pressure on to the end, finding the net to reduce the margin to one point as Hayley McDonnell finished off a shot in the last minute.

This was to prove too little too late as referee Paul Burke blew full time as the ball entered play leaving St Brides as 2016 Louth Ladies Intermediate champions.