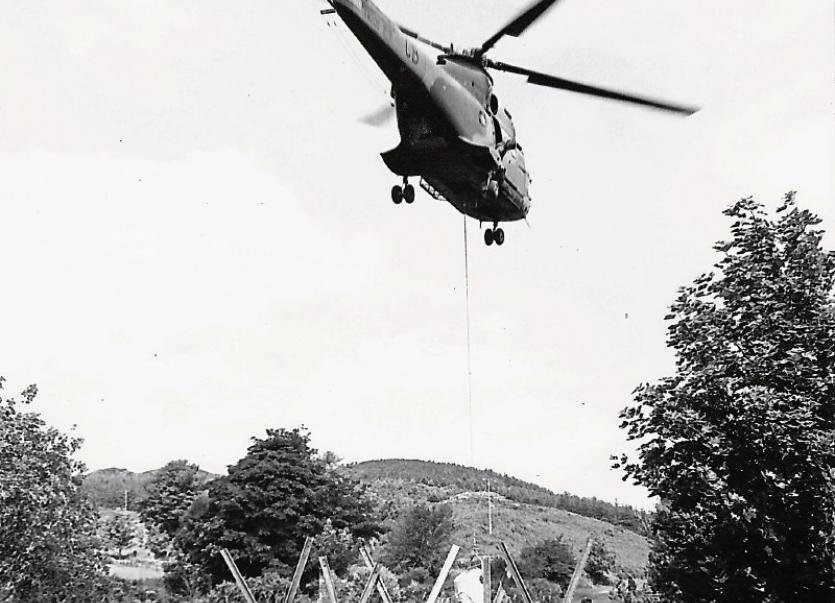 The attached photograph, taken by my late brother Paul he when was on the journalistic staff of the Dundalk Democrat over forty five years ago, seems to me, all these years later, to be symbolic of bad times that have passed --- and yet, times that might come again along the Border with Northern Ireland!

It is a photograph of British Army engineers using a helicopotor to erect a barrier across a small country road between Louth and Armagh sometime in 1971. There had been attempts to close cross-Border roads prior to that year to stop raids across it by armed republicans but nothing like the effort that went into the campaign that followed Bloody Sunday in Derry. Locally the most significant event was the Battle of Dungooley in January 1971 which I referred to in my notes a couple of weeks ago as being the most intense engagement in the thirty years of the 'Northern Ireland Troubles'!

Up to that time there had been a limited spiking of some minor roads but then began the erecting of those steel barriers, the blowing of craters, building of check-points along some roads and the erection of check-point towers. The most hated of these was the Watch Tower which overlooked the Concession Road near Cullyhanna Village!

It must have cost a lot of time and effort, not to speak of the risk to life and limbs for both sides in the conflict, but all that it achieved in the end was the alienation of the local population and, as some have claimed, was 'a Recruiting Sergeant for those who wished to oppose the British occupation by violence.' Local people along the Louth Border went out of their way to fill holes in the roads, tear down barriers and even to temporarily repair bridges when British Army soldiers were not present. It seriously damaged the economy of the Dundalk area which never really fully recovered and did not receive any great support from their own Government during those bad times!

Many people in these parts must have thought that those times had gone for ever but the recent Brexit vote in the U.K. has raised the spectre of new Border controls in the not too distant future!

The politicians are talking about it not going to be the same again this time and are hoping that there can be some kind of agreement that might prevent it. Wiser people in this area, however, are not so sure and many feel that it is inevitable that there will be some kind of a physical Border in the not too distant future. We can only hope that nobody, either in the U.K or Europe, will suggest that we should have some kind of a Mexican Wall erected in these parts which the Irish people will be expected to pay for!

Where exactly is 'The Border'?

Although the subject has been discussed a lot over the past few months, probably, very few people living in Dundalk of the present day will know exactly where the 'Border' is located in relation to the town! The Border was created 95 years ago and, in the Dundalk in which I grew up, it was something of paramount importance. It dominated the town's economy and even its leisure and social life and most people knew exactly where it ran!

Then came European Community and finally the Good Friday Agreement which ended the hostilities--- or, at least, most of them and local people began to forget about its existence for nearly two decades. All that ended, however, with the Brexit vote by the majority of the people of the U.K. and suddenly everybody was asking 'what is going to happen next?' Some were even wondering 'where is this Border and how will it effect us in the future?'

The interesting thing is that the Northern Ireland State existed some 18 months before our own state was established but the actual Border was not defined for nearly another decade while the Boundary Commission was still deliberating! Even afterwards the actual Border was still being disputed in relation some physical features, such as where it ran down Carlingford Lough and even in relation to the exact spot where the main Dublin-Belfast Road crossed the Border because a stream that marked it in 1921 had changed its course. I can recall many disputes in local courts over the exact location of the land boundary in relation to revenue cases.

None of all that really mattered when Ireland the U.K. were both members of the E.U. but now things have changed again. Border disputes and inconveniences are bound to arise when Northern Ireland leaves the Union; whether anybody on either side of the Border likes it or not!