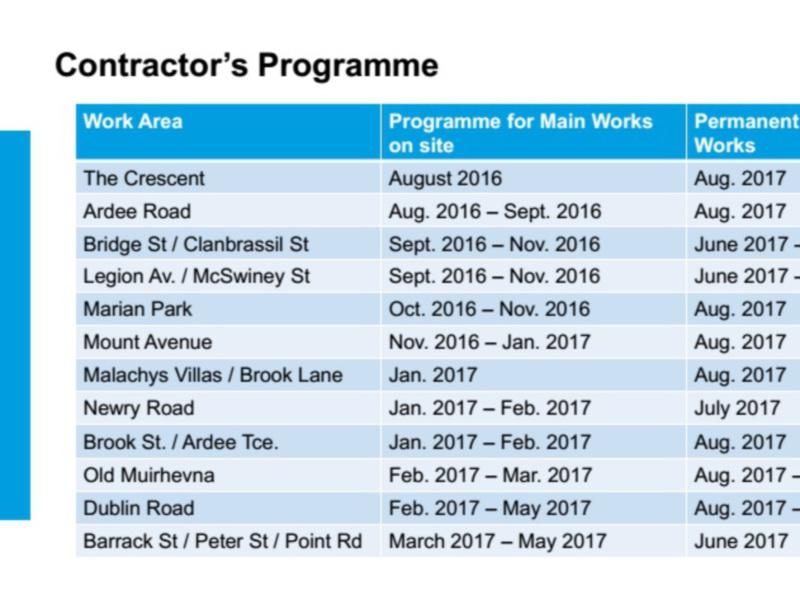 A major water conservation project by Irish Water will connect 786 homes and properties in Dundalk to a new water main.

The new water main will connect schools and businesses in the town including Louth County Hospital, Dundalk Grammar School and the Brewery Business Park.

Other businesses benefiting from the project include cafés, pharmacies, bars and restaurants along Clanbrassil Street.

The project will upgrade 3.5 per cent of the overall water network in Dundalk which results in a population equivalent of 1,295 based on a Dundalk population of 37,000.

At a meeting last week of Dundalk Municipal District Committee councillors were told that this project will secure the supply for residents and the business community in Dundalk which is needed to support the continued economic development in the area.

Mr Ryan Hanley told councillors that the contract for the work was signed in May and it will take 18 months.

Most of the pipes that will be replaced are cast iron pipes which are fifty to eighty years old.

The new service pipework will be installed as far as the customer’s boundary.

A liaison officer has been appointed and there will be full communication and interaction with property owners before work starts.

Letters will be sent to households and businesses in advance of works explaining the works and seeking consent.

There will be follow-up visits to households where consent has not been returned.

Work will be carried out from Monday to Friday - 8am to 6pm.

No work will be allowed in the town centre in December.

Mr Hanley told councillors that every effort will be made to avoid unplanned interruptions to water supplies while the work is being carried out and the project team is also aware of the need to minimise impacts on business and traffic flows.

Cllr Conor Keelan asked if the work with coincide with the upgrading of Clanbrassil Street.

It was explained that for contractual reasons the Irish Water programme would have to go separately, otherwise €2.4m in EU funding could be in jeopardy.

Cllr Maria Doyle stressed the importance of properly replacing footpaths and pointed out the difficulties that some areas might pose because of narrow street ways, areas such as St Malachy's Villas. But she welcomed the upgrade.

Mr Hanley explained that all footpaths will be restored and there will be traffic management in place for all works.

He said water savings are not the only issue involved. Louth loses 38 per cent of its water through leaks which is below the national average, but the project is also about improving the quality of the water in Dundalk.