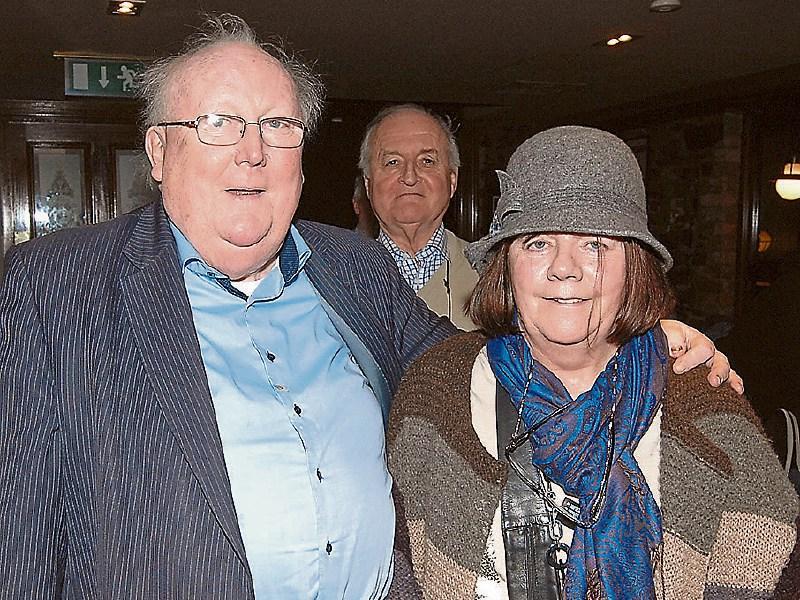 The recent loss of two local solicitors was remembered at Dundalk District Court last Wednesday which sat earlier than normal so tributes could be paid to Dermot ‘Doc’ Lavery and Frank McArdle.

Roger MacGinley on behalf of the Louth Bar Association, sympathised with the Lavery and McArdle families. He said it was the first time in his experience the legal community in the town had come together like this to mark ‘a double loss’ and he noted the deaths had ‘greatly shocked’ the community.

Mr MacGinley recalled that a friend remarked the week before that “we have lost two institutions” and while “neither Frank or Dermot ever had much time for institutions”, he said “there is certain grain of truth in that remark”.

The court heard Mr McArdle first went into partnership with the late Peter O’Connell before establishing his own practice at Roden Place and retired a couple of years ago. Mr. McGinley added ‘Frank showed himself to be a skilful lawyer, a good friend and a co-operative colleague. The last thing he would have wanted was any kind of eulogy here or anywhere else but it is right and appropriate that we should express to the court, to his family, our deepest sympathies to his brother Jim (also a lawyer), John, Paul and all the McArdle family’.

In moving on to Dermot Lavery, Mr. MacGinley said that although tributes will be paid to him “in public and private in many places because of the many-sided aspects of his personality and his remarkable life.

It is appropriate that here, with his colleagues, we should focus on his legal career”.

The court was told Mr. Lavery had qualified in 1969 and returned to Dundalk after working in Kilkenny. Mr. MacGinley said “He was a superb lawyer, an outstanding advocate and a wise and prudent advisor and counsellor, because he knew and loved and understood humanity.

‘His son Peter, at the funeral Mass, said his father always favoured the Indians over the cowboys, but I have to tell Peter that in the 45 years in which Doc plied his trade, he saved many cowboys too!

‘It’s sometimes said that about a great man that he was all things to all men. I think that Doc was something better than that - he was the same to all men; whether you’re a Supreme Court judge or the neediest of the legal aid client , you were always met with the same instinctive courtesy, respect, humour and friendship’.

The court heard how Mr Lavery had been a member of the Solicitors’ Benevolent Association and also served a term as president of the Louth Bar Association. Roger MacGinley added ‘He has bequeathed his family - our colleagues Niall, Peter and Kate - outstanding qualities of character - integrity, humanity and charm.

‘I wish to express to them, on behalf of all of us here, our deepest sympathies on their tremendous loss of Doc, to their dear mother, Ger, and all the members of the family.

‘I express it on behalf of all those whose lives have been so enriched and enhanced by his’.

Judge Flann Brennan described both solicitors as ‘passionate performers’ and ‘men of presence’ and referred to Mr McArdle’s athletic career and Mr Lavery’s life on the stage.

The judge said both ad distinguished themselves in the serious business of life and their loss ‘is greatly felt by their families and friends’.

Judge Brennan described their deaths as “ a great blow to the legal community in Dundalk, to those who are closest, family. It is indeed poignant that the last time I saw Mr McArdle was on the steps of this (court) building where we paid tribute to Mr Lavery at his funeral’.

On behalf of An Garda Síochana Inspector Martin Beggy expressed his deepest sympathies to the McArdle and Lavery families and said both men were ‘courteous and professional’.

State solicitor for County Louth, Fergus Mullen, also expressed sympathy to both families also, in behalf of the Director of Public Prosecutions and his own family.

He said that Dermot Lavery had been described as ‘an impossible act to follow’ and added that his only regret was that he had never had the opportunity to direct the accomplished actor Mr Lavery in a production.

Mr. Mullen said like Atticus Finch in To Kill a Mocking Bird, Mr. Lavery had ‘courage in law and life’.

On behalf of the Probation Service, Sheena Norton expressed sympathy and the hope that Mr Lavery’s good work would be continued by his sons.

On behalf of the Drogheda Bar Association, Finian Brannigan said the deaths were ‘a terrible blow’ to the profession in Dundalk and added that Mr Lavery’s wit and humour made him the ‘doyen of Dundalk District Court’ while he said Mr McArdle had a great ability to put people at their ease.

He concluded by saying ‘I know that both these decent men will be dreadfully missed by all those whose lives they touched’.

Alan Cooke on behalf of the Courts Service paid tribute to the courteous nature of both men.

On behalf of the Eastern Circuit, barrister John McCoy referred to Mr Lavery’s literary knowledge which he sometimes used in cases and how Mr McArdle was a man ‘you could always do business with’.

Paul McArdle thanked the speakers for their tributes while Niall Lavery said the comments were greatly appreciated by the family.