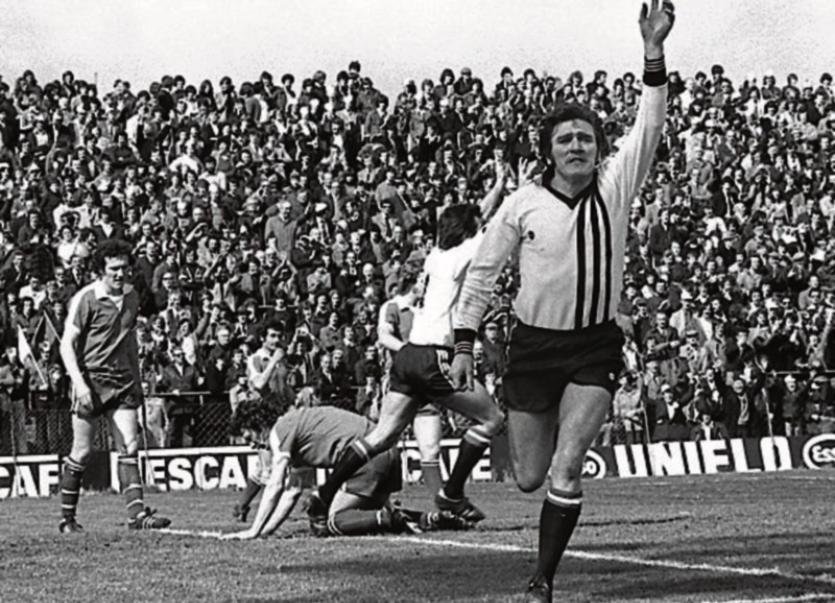 When writing the answer in this week's Question Time about Dundalk FC's involvement in the European football Fairs' Cup nearly fifty year's ago I was reminded about the local soccer club's connection with that competition.

Up to the present time the Dundalk club had enjoyed its greatest success in European football while taking part in that competition. It is fitting, therefore, that the competition in which they are now involved is the successor to it. The Fairs' Cup was first established as an addition to the European Champions' Cup. Only major cities were invited to take part. Gradually the rules were relaxed which permitted clubs like Dundalk to enter. The result was a mixture of sport and politics which left its mark on Dundalk's development.

In the Dundalk in which I grew up there was huge division between the followers of soccer and Gaelic football, mainly based on a local family's nationalistic ideals. The root of this division lay with the G.A.A.'s 'Foreign Games Ban'. It was no secret the Irish Christian Brothers punished severely any of their pupils they discovered had attended an Oriel Park game on the previous Sunday. The irony of the situation was that many of the pupils who were 'informers' on their classmates became the greatest soccer enthusiasts and even administrators after they finished their schooling!

I was not greatly effected by this 'pogrom' because I was taught by the Marist Fathers who were 'liberals', both in religion and politics, and yet managed to produce some of the best Gaelic footballers in the region. Yet there were some who attended St. Mary's who despised soccer and would have nothing to do with that 'code' of footballer. I was never much good at any form of sporting activity and did not get much involved it the arguments but my father was a soccer fanatic who took me to Oriel Park on the bar of his bicycle before I was able to walk!

The change came, I believe, when the 'Ban' was lifted and that had to do with Irish clubs like Dundalk, playing and enjoying some success, in European football competitions. From the fifties onwards soccer came to be seen in Ireland, not so much as a British Empire sport but as an international game with more widespread appeal than any other!

Yet the politics and ethnic divisions were still there and began to take the form of 'football hooliganism'. Dundalk had its first real taste to this in 1968 when they were drawn against Glasgow Rangers in the Fairs' Cup. The first game was at Ibrox Park and it was no real surprise to me to see slogans and hear anti-Catholic chants as I had been in Glasgow some years earlier and had got my first taste then of the depth of this religious feeling --- long before it had appeared on the streets of Belfast! The Glasgow police were well prepared and dealt with the trouble swiftly but I was concerned that Irish law enforcement officers might not be as well preparedf!

I recall that I was rebuked by a reader of the Democrat about my writing in the next Saturday's edition that Dundalk shopkeepers might expect trouble when the Rangers fans were due to arrive here on the following Tuesday! It gives me no great satisfaction to claim that 'I was right' and the trouble that followed the game in Oriel Park may still be remembered by any of my readers who were around on that night.

The sectarian 'Troubles' in Northern Ireland were only just beginning in 1968 and the scenes on that October night so long ago were nothing compared to the riots in Dundalk that were to follow. In particular, the trouble that followed Dundalk's game against Linfield in September 1982 when the European football authorities took such a serious view that they moved second game from Belfast to the Netherlands. Dundalk won and went on to play, of all clubs, Glasgow Celtic! I wonder what might have ensued had Dundalk not won and Linfield were to play Celtic!

One of the most amusing scenes I witnessed in connection with football violence occurred when Dundalk played Ajax in now defunct European Cup Winner's Cup competition at the Amsterdam Arena in September 1988. Before the game began some Dutch 'thugs' invaded the pitch and proceeded to the end of the ground where the Dundalk supporters had been allocated spaces. They must have believed that Dundalk were a club from the U.K. when they produced a large Union Flag and set it alight. They appeared dumbstruck when Martin Lawlor and few of his team-mates, wearing the Dundalk kit, appear on the pitch and began to applaud their demonstration! Even the Dutch press did not appear to understand what was going on!