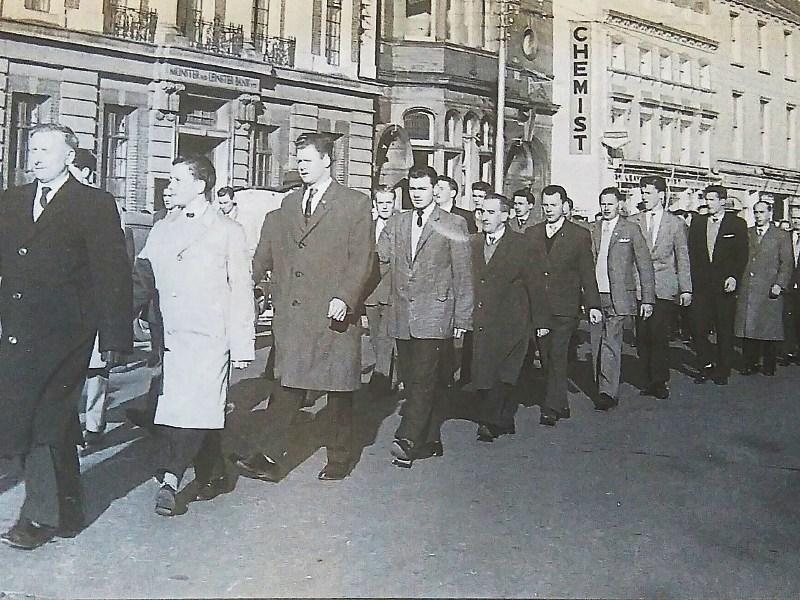 A special reunion of former Clark’s workers will be held at the Crowne Plaza Hotel Dundalk on Saturday 24 September starting at 8pm.

This is a unique opportunity for many people who worked at Clark’s and Hallidays to have a very special evening and recall great memories of the days when Dundalk was known as “The shoe capital of Ireland”.

There were five shoe factories in the town: Hallidays, Clark’s, Rawsons Connolly’s, and Weyenberg.

Hallidays was the first British company to set up here after the Free State was established in 1922.

Tempest’s Memoirs of Dundalk at Work - The Shoe Industry - which was published back in 2010, gives a wonderful history of this shoe industry.

The Hallidays were a Quaker family and Fred Halliday brought with him a group of skilled workers to help set up the Dundalk factory.

The three main brands of boots made by Hallidays were Blacksmith, Stringo and Strongbow. Like all Quaker business families, the Hallidays had very good industrial relationships with their employees.

A pension scheme was set up in 1938 and younger workers were even taught school subjects during the working day. This was the first of its kind in Ireland. Probably one of the first in Europe.

During the Second World War, or The Emergency, as it was known, production continued despite full and energy shortages.

Fred Halliday died suddenly in 1935 and his nephew Arthur became the managing director. Arthur was a friend of Bancroft Clark, a shoe manufacturer from Somerset.

They developed a partnership and Halliday’s began making Clark’s shoes in Dundalk in the 1930s for the Irish market.

This meant Clark’s could avoid paying tariffs imposed by the government here on foreign goods.

In 1950 Hallidays started making a range of Clark’s products for the English market. So you now had English shoes being made in Ireland and exported to England.

If only we had those very clever people running the country now.

This expansion of the Halliday-Clark partnership became so successful, a new factory had to be built.

In 1971 Clark’s took full control of the company and everything moved to the Ramparts site. Employment was now 1,100.

But then low cost imports from England and the Continent hit the Irish footwear industry very hard and on 31 January 1985 Clark’s closed.

The reunion planned for Saturday 24 September at the Crowne Plaza in Dundalk Will hopefully see many former employees come together for a unique occasion.

The organisers are Lucy Holmes, Madeleine Carroll, and Mary Murphy.

They told me that they expect to see many people, such as Tommy Carroll, now 88, Joe Martin, Rosemary Winkles, Willie Dixon (organisers of the Tops of the Town teams), Jan Van Dessell, Tommy Kelledy, Paddy Crossan, and many many more.

Tickets are €15 each and can be had from Grants Newsagents Dublin Street Dundalk.

This will be the only reunion I am told.

So spread the news.

It's a chance to relive old memories and renew old friendships.