Stars of country music descend on the north east 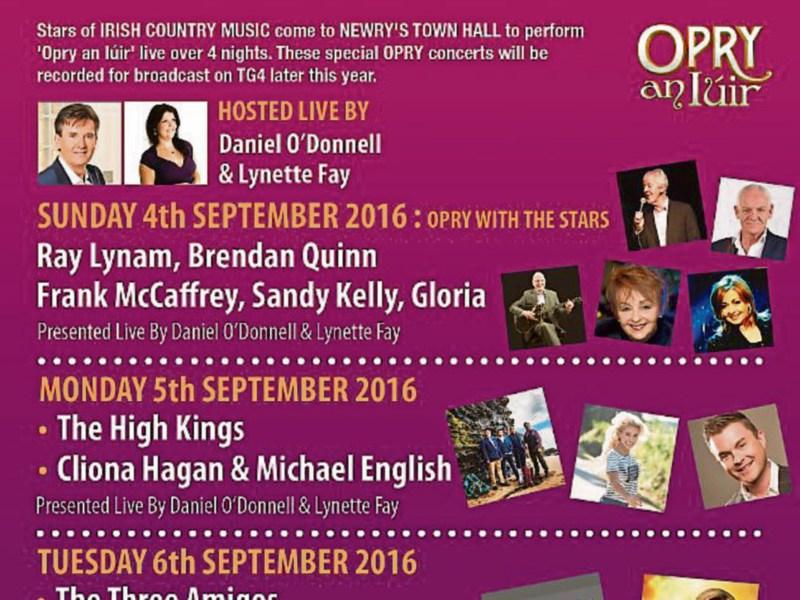 From Sunday September 4th to Wednesday September 7th, the stars of country music will descend on the North East.

Presented by the King of Country Music, Daniel O’Donnell, who will be joined by Lynette Fay, some of the biggest stars of country music, past and present will feature across the four-night extravaganza, taking place in Newry Town Hall for broadcast in late September on TG4.

Each week the featured artist will perform a selection of their greatest hits, as well as an Irish-language duet with a well-known traditional singer, promising an evening of unmissable music. In each episode, Daniel will also duet with the featured country artist and perform some of his own best-loved hits ‘as Gaeilge’.

This year’s Opry also features a one-off country spectacular - ‘Opry with the Stars’ – where Country & Irish veterans Ray Lynam, Brendan Quinn, Frank McCaffrey, Sandy Kelly and Gloria will delight us with a mix of solo and joint performances.

Multi-instrumentalists The High Kings, fresh from a sell-out US tour, swap Nashville for Newry as they guide viewers through the highlights of their back catalogue. They are joined on stage by renowned singer Nell Ní Chroinín, the youngest ever recipient of the TG4 Singer of the Year award.

In an Opry exclusive, Newcomer of the year Clíona Hagan and Country Dance Act of the Year Michael English, form an unstoppable duo. Michael & Clíona will be joined by Connemara’s award-winning country and seán-nos singer Pól Ó Ceannabháin.

Country music hit maker Trudi Lalor will also deliver a jam-packed set and give viewers a look into her rise to fame. Trudi will be joined by Connemara teen country sensation, Máitiú Ó Domhnaill.

The Three Amigos are no strangers to our TV screens and never fail to impress. The supergroup - comprising of Robert Mizzell, Patrick Feeney & Jimmy Buckley - brings the stage alive with their harmonious voices. They team-up with Belfast singer-songwriter Gráinne Holland, who can count Mairéad Ní Mhaonaigh of Altan among her many fans.

Westmeath man T.R. Dallas has been making moves on the scene since the 70s. Showcasing how he can still get the crowd on their feet, he takes to the stage to sing his some of his best country hits, and will be joined by tuneful sean-nós singer Roise Nic Corraidh.

Recorded in front of a live audience, mixing archive and testimonials from their biggest fans, Opry an Iúir brings the essence of Nashville’s Grand Ole Opry to Newry.

Opry an Iúir is produced by Big Mountain Productions for TG4 with funding from the Irish Language and Broadcast Fund.