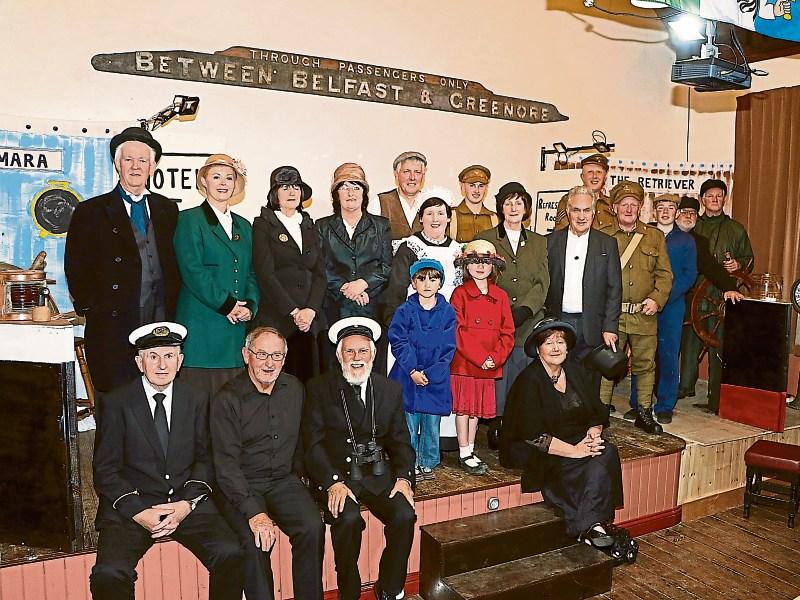 “A Time To Remember” a play written and directed by Michael Ferguson was warmly received when it premiered in Greenore recently.

It played to packed houses which is not surprising as it encompasses emigration, the 1916 Rising, the First World War and Carlingford Lough's worst sea tragedy.

The storyline is based on events in the lead up to the departure from Greenore dock of the passenger vessel S.S. Connemara on the ill-fated voyage of 3 November 1916 when it was in collision with the Newry bound collier the S.S. Retriever.

The tragedy happened off Carlingford Bay, while voyaging from Greenore to Holyhead with passengers, general cargo and cattle.

The play has been a huge success. It was staged at Warrenpoint.

This play was written and produced by local playwright Michael Ferguson and performed by the hugely talented Greenore Drama Group.

It is a tribute to all those lost in that horrific tragedy.

The play will also be performed as part of Connemara Retriever Centennial Commemoration to be held in Greenore on 9, 10 and 11 September when the naval vessel L.E. Roisin will be in attendance.

On Sunday 11 September there will be an ecumenical prayer service and blessing of wreaths on the promenade at Greenore.

There will be a parade to the quayside where wreaths will be handed over to the captain, officers, and crew of the Roisin. The event has been funded by the Department of Foreign Affairs. A delegation, led by its Lady Mayor will attend from Hollyhead.

The SS Connemara was owned by the London and North-Western Railway Company and its Captain GH Doeg and crew of 30 all came from Holyhead in Wales. The passengers on board included soldiers from the front returning to the Great War along with people from Louth, Cavan, Monaghan, south Armagh, Down, Longford, Sligo and Antrim.

There was also livestock on board.

The Retriever was owned by the Clanrye Company and had a crew of nine. The only survivor of the disaster was fireman James Boyle from Warrenpoint. The others were from Newry.

The weather on the night was very bad and many thought the Connemara would post-pone its journey. Unfortunately it did not.

The Retriever left Garston for Newry loaded with cargo at 4am but was running late due to the gale force winds. The Connemara left Greenore shortly after 8am bound for Holyhead. About two-and-a-half miles from Greenore she passed the Hawbowline lighthouse.

The watch at the lighthouse saw the two ships coming too close and fired off rockets in warning. The Retriever struggled against the gales with its unsteady cargo to avoid the Connemara but a huge wind swung it into the side of the ship, smashing it from hull to funnel. The ships locked together for a moment but the Retriever had reversed her engines seconds before the collision causing it to swing wide leaving the Connemara open amidships. It sank within minutes followed by the Retriever. Ninety-four people lost their lives.

The only survivor James Boyle was 21-years-old. He was on the Retriever. He was rescued by local men William Hanna and Hugh Doyle after being alerted by Peter Morgan.

On the beach people saw livestock desperately battling the waves to reach the shoreline. By the early morning it became clear how widespread the tragedy was with more livestock wandering the beaches along with bodies being washed ashore. The bodies were collected in carts by local farmers and a temporary morgue was set up in Nicholson’s shed.

A Mr Patrick Kearney and his wife Kathleen Kearney were killed in the tragedy. They were on their way to meet their sister in Liverpool and while waiting in the train station in Newry they met RIC Sergeant Fitzpatrick who told them it was likely that the Greenore boat wouldn’t sail due to the poor weather.

He suggested they go to Dublin instead. Mr Kearney decided to flip a coin and the result was they went to Greenore.