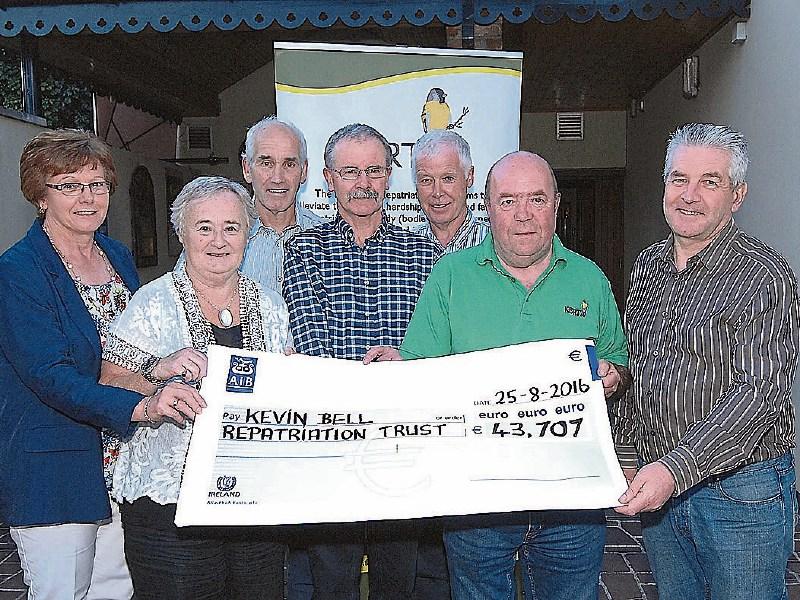 A cheque for €43,707 was presented to the Kevin Bell Repatriation Trust at Kennedy's Bar, Carrick Road Dundalk last week.

The money was the proceeds of the fundraiser in memory of the Evan McArdle Dundalk and Niall Quinn Silverbridge sponsored walk and road cycle held in June.

The Kevin Bell Repatriation Trust supports bereaved families who are trying to repatriate the bodies of their loved ones who have died abroad in sudden or tragic circumstances.

The presentation was made by Evan's parents Jock and Susan McArdle to Colin Bell.

Jock and Susan have expressed their sincere gratitude to all those who took part in the fund raising events. The fundraiser came about because the McArdle family were so thankful for the support they received from the Bell Trust.

When the family got to Vietnam the embassy there “couldn’t have done enough, “But it’s the Kevin Bell Repatriation Trust that helps people,” said Jock.

“The trust was set up by Colin Bell, father of Kevin, who was killed in a hit-and-run accident in New York three years ago.

“It was a very costly repatriation and the people of Newry raised £150,000 to help out. Then the company Kevin worked for in New York said they would pay the repatriation fees and Colin was left with the £150,000 so he set up the trust.

“To date he has taken home 180 bodies. At least one a week. All the money is from people who have lost family members.”

So Jock decided to organise a mountain walk to help the trust. Then Larry Connolly, of the Cycle Centre, said: