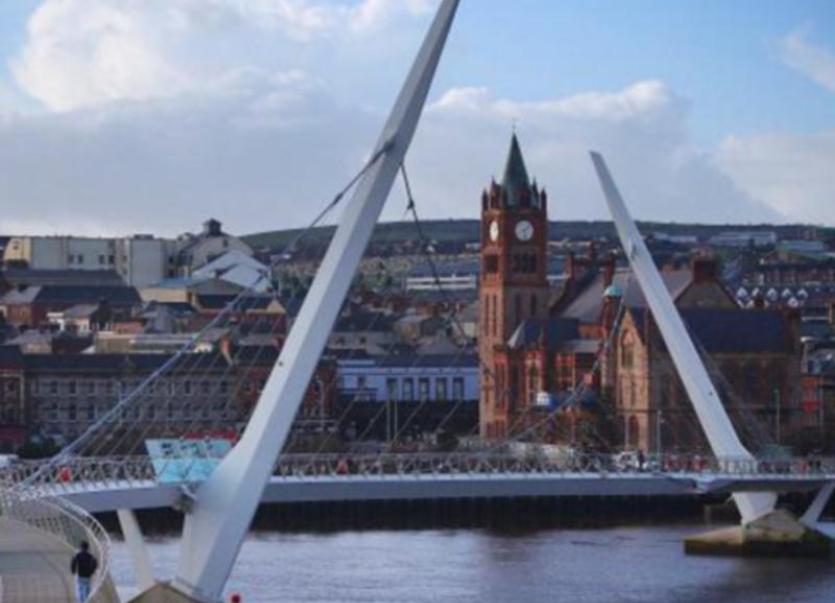 Many Dundalk residents of the present day will have connections with Derry City which go back over 150 years to the time when Dundalk was connected to the city on the banks of the Foyle by the railway system. In fact, old local railwaymen still refer to the old single track line between the Portadown Junction and the Maiden City as 'The Derry Road'.

That connection is long gone but many Dundalk people had, and some still have, grandparents and great grandparents who were born and reared in the Derry City; or maybe they would call it Londonderry. But did you know that the Dundalk Democrat had an intimate connection with the Derry Journal? That connection is even stronger than the fact that both publications were both owned, for brief period, at the same time by Johnston Press, as the Journal still is!

My own connections with Derry City were more involved with its hinterland in County Donegal and I still have many blood relatives living there who remind me of youthful memories of the Derry Journal. At a time when I could barely read I was impressed by the fact that the Journal was an unusual publication, in that it was published twice weekly, on Tuesdays and Fridays, and when I joined the staff of the Democrat I had hopes that the Democrat might one day achieve that record also!

It was not those memories, however, that remind me most of the close connection between the Dundalk Democrat and the Derry Journal! The two broadsheet publications were both printed on the very same Cossar printing press, not at the same time but the Democrat was the immediate successor to that tradition when the Journal moved from its old premises at the heart of Derry, on Shipquay Street, after the most recent Troubles began there in the late 1960s!

I was reminded of how this came about when I read an article in the Irish Times on Saturday by a Freya McClements, (I wonder are her people from Derry) telling the story about how the Derry Journal come to be the only local newspaper to be banned on both sides of the Border.

How the Democrat came to be printed on the Derry Cossar is a long and convoluted story. It all began away back in 1775 when the original Journal was founded. Unlike the original Democrat, the Journal was a very different newspaper then, as it was founded as a Protestant landlord supporting publication. The paper began to change its stance when it supported Catholic Emancipation in 1829, so much so that the then Editor resigned and founded his own Unionist publication; while the Democrat was founded in 1849 by James Carton to try to pull down the Act of Union. It was not until 1880, however, that the Journal became a fully Home Rule supporting publication.

By the time that the Troubles began in Derry in the late 1960s the Journal offices became the target of the Orange mobs as 'a nationalist rag' and the owners decided to move to new printing works at Pennyburn on the northern outskirts of the city. How exactly the Roe family, who owned the Democrat at the time, got involved I do not know but the outcome was that Tom Roe purchased the old Cossar press on which the Journal had been printed for many years.

What I do remember is that I was in the old works at the back of Shipquay Street on a Saturday afternoon on 1970 when a mini-riot was taking place outside around the Diamond. I had accompanied Tommy Gosling, from Hill Street, the Democrat 'machine man' printer for many years; probably because I knew Derry better than any others on the staff of the Democrat at the time. What do remember is that Tommy worked stoically for hours, with the help of some Derry printers, dismantling the Cossar and then loading it on a lorry driven by another brave Dundalk man whose name I cannot now remember. I was not a lot of help to them, other than to act as 'guide' to Derry and its environs but we carried out the 'operation' successfully!

That Derry Cossar made a big difference to the publication of the 'Democrat' during the 'boom' years of the paper during the 1970s. When I joined the Democrat in the early fifties, there were only six broadsheet pages being printed each week on the original Cossar in the basement at Earl Street. The number of pages gradually increased in the sixties but we could still only print twelve pages, with the aid of a 're-wind' which had been printed earlier in the week and then fed back into the main sheets in the early hours of a Saturday morning.

When the Derry Cossar arrived at Earl Street the whole basement was revamped so that it could be linked up with the original Cossar and we could now produce a paper with up to 36 broadsheet pages. This was at the time of the property sales boom in Dundalk and we would carry about six full pages of house and site sales, apart from an increase in other advertisements. It was a great time to be in the local newspaper business as the national papers had begun decline but we were not as greatly effected as them by advertisments going to television and radio!

The twin Cossars continued to print the Democrat for another 20 years or more, until the Anglo Celt printing works in Cavan Town took over its productions for a number of years. When I was Editor, in the late 90s, a man from New Zealand tried to buy the old Cossar printing press and made a substantial offer, including its shipment to the Antipodes, but Tom Roe was not interested. I still wonder what happened to the old Cossars and can hear the 'rumble' of the machinery, churning away, in the recesses of my memory!