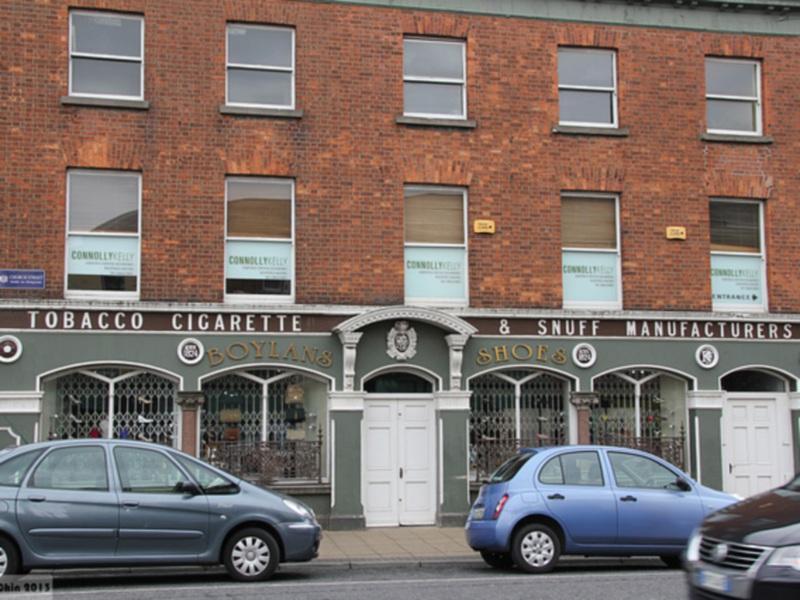 Recently I received a very interesting letter from a reader of these notes who lives at Artoney, Louth Village about the piece I wrote some weeks ago on Mazawattee Tea. Gerry Doherty, whose family comes Clones, County Monaghan but was brought up in Drogheda, writes --- 'I have an enamel sign, two feet by six inches, for this brand that I got in an old building in Cavan Town.' Gerry also enclosed an article from an American magazine which caters for pipe smokers, which was published just this summer.

The article deals with a visit of one of their contributors to a pipe manufacturing premises at Sallynoggin in County Dublin run by Knapp & Peterson, Ltd. Gerry, in his letter, remarks – 'When you remember all the lovely brands of pipe tobaccos that used to be manufactured here in Dundalk, funny we have to read in an American journal what is being done in Dublin!'

When I spoke to Gerry on the telephone, he explained that he had started working in Dundalk in the late 1950s in the offices of Henry Backhouse & Co. at 24/25 Clanbrassil Street and later he transferred to bonded warehouse at Bachelors Walk run by N. Carolan & Co. He said that he had worked there with a Customs Officer named Frank King, dealing with imported spirits. He reminded me that, prior to Ireland joining the European Common Market, there used to be customs officers permanently attached to the big importing warehouses in Dundalk checking the payment of duty on alcohol and tobacco.

On the subject of pipe smoking, Gerry said that, in the 1950s and 60s, most older men in Dundalk smoked pipes and he recalled that, while he was working at the bonded warehouse, they used to import 'high strength Jamaica Rum'; not for sale in pubs or hotels but for flavouring in the manufacture of pipe tobacco by P.J. Carroll & Co. He also reminded me that there were many tobacconists in Dundalk selling pipes and that the most popular makes were Petersons. Mind you, they were not the most expensive brand of pipes at the time – which I believe were Meerschaum, made out of a special clay that, I believe, could only be obtained in some part of Germany. Some of the Peterson pipes were dear enough, however, and I recall that the more expensive ones were decorated with a sterling silver ring around the joint between the stem and the bowl. It was not until later that smoking pipes had replaceable filters in them and I recall that smoking a pipe could be a messy enough business, with the saliva tripping from the stem when they were put down after a long smoke. It is not surprising that many housewives were not too fond of hot pipes being put down on tables or other furniture! Not that cigarettes were much better in this respect!

Gerry also told me that he could remember my old Editor Frank Necy sitting behind his desk on the first floor office of the Democrat --- with a lighted pipe in his mouth! He also told me that Frank had originally worked at the Backhouse offices in Clanbrassil Street. He did not know what job Necy there but I believe that it must have been as an accountant. I know that he had first worked in the Democrat in this capacity and that it was only afterwards he took up journalism. It must also have been about the time he had got involved in the 1916 Rising when he was in his twenties. He was fond of his pipe when I knew him!

Gerry also reminded me that the mineral water manufacturing companies in town also had their own glass bottles, with their crests and slogans embossed on the glass. He said that these bottles were specially made for the local firms by the Irish Glass Bottle Company. The Backhouse brand was called 'Bee' and minerals made by Nicholas Hardy at Lower Clanbrassil Street named 'Diamond'. The mineral water bottles had glass balls in them which rose to the top when filled and made a seal; these would be collected by boys who smashed the bottles and used the glass stoppers to play the game of marbles. Other bottles had wire clips, with a rubber washer to keep in the liquids.

Some of the pubs around town may also have had their own brand bottles for the sale of beers and ales but I think those bottles may have been much older!

I have seen some marked bottles in the County Museum at Jocelyn Street and wonder if there are many of these bottles around still? If so, they could make great collectables and some of them might even be fairly valuable!