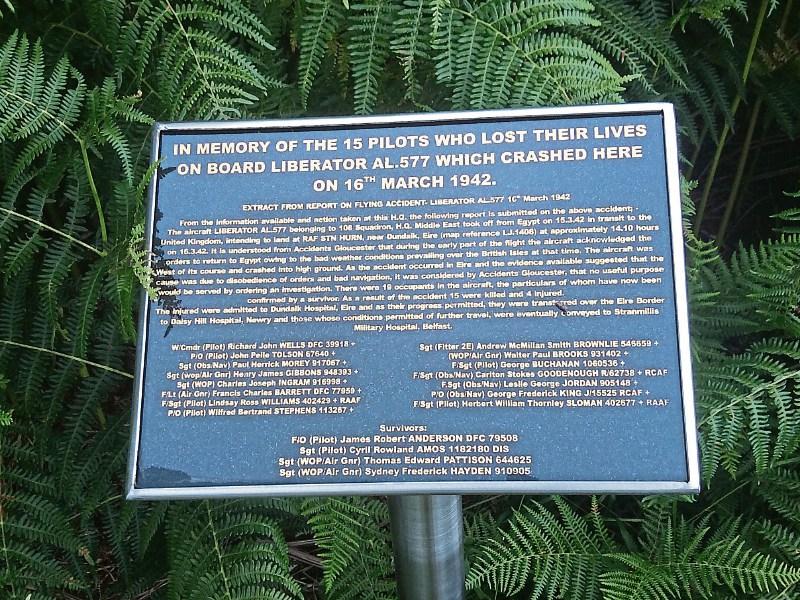 A Dundalk man has made a new plaque in honour of the crew and passengers aboard a plane which crashed on the Cooley Mountains in 1942.

Brendan Connolly from the Alphonsus Road has made a fresh plaque to mark the spot of the crash of the RAF B-24 Liberator and the 15 people who died when it slammed into boggy ground on the side of Slievenaglogh Mountain, in the Rock Marshall Mountains near Jenkintown during the Second World War.

Brendan had previously placed a concrete statue of the plane at the site.

The RAF B-24 Liberator crashed into the mountain after getting lost in thick fog while making a trip from Egypt to RAF Hurn in Dorset.

The flight crew were told before they reached the halfway point in their journey to turn around due to extreme weather conditions.

However - nearing the point of no return - they decided instead to continue on their fateful journey.

Sadly it left its course and running low on fuel, the crew saw the lights of a city which they understood to be Dublin.

The crew decided to attempt a landing at Greencastle Airfield, County Down. However thick mist hampered visibility, resulting in the aircraft crashing into Slieve-na-Gloc and breaking apart on impact.

The alarm was raised by a local man by the name of McKevitt who heard a plane overheard before a loud crash.

After he witnessed the scene he got medical help, and miraculously there were five survivors.

Accounts vary, but ultimately 15 people died as a result of the crash.