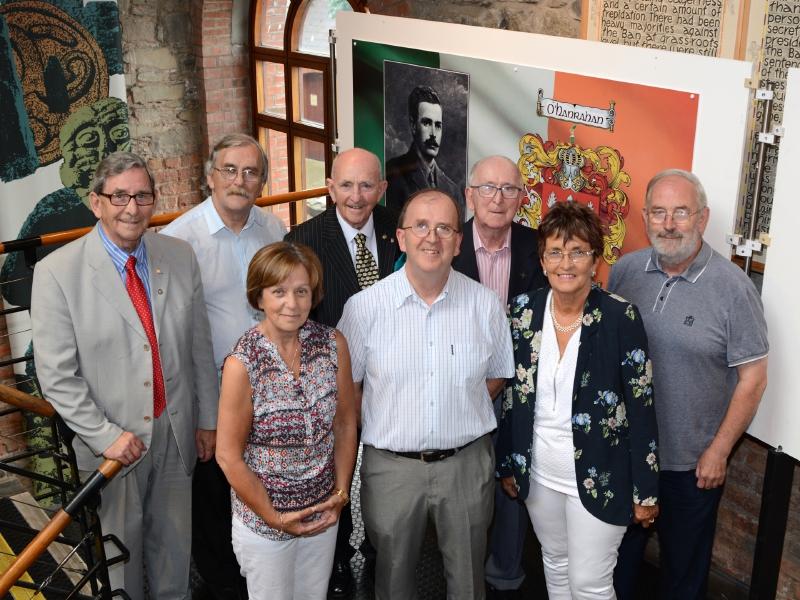 The O’Hanrahan Chronicles’ exhibition, which documents the contribution of 1916 leader Míchéal O’Hanrahan to the quest for Irish freedom and the Easter 1916 Rising, was officially opened last week at County Museum Dundalk, by Head of Special Projects at the National Archives of Ireland, Catriona Crowe.

Curated by his grand-nephews, Pearse and Harry O’Hanrahan, the exhibition includes a variety of family possessions, most notably a music manuscript of songs written by fellow 1916 leader Éamonn Ceannt.

This features an alternative national anthem, set to the tune of Haydn’s German national anthem; and a photograph of Éamonn Ceannt carrying a tricolour while marching in uniform - Michéal O’Hanrahan is seen in the background saluting the flag.

Speaking at the opening, Ms Crowe, said: “This is a fascinating exhibition about one of the forgotten executed leaders of the 1916 Rising, Michéal O'Hanrahan, and his extraordinary family, most of whom were involved in the Rising.

While this was extremely personal for the O’Hanrahan family, it is also of national significance, providing names for faces seen in photos and documents from a number of cultural institutions, such as those taken at Cathal Brugha’s funeral, and providing an insight into the networks that existed between the leaders, volunteers at Dublin Castle and other like-minded people.”

Pearse O’Hanrahan, grandnephew of Míchéal O’Hanrahan said: ‘‘The compilation of this exhibition was a voyage of discovery for us and we spent many a day in the National Archives of Ireland. Of course our grand-uncle’s story has been passed down through generations of our family but our research has shed so much more light on his role in the 1916 Rising. We are immensely proud of his contribution and that of all of his family, who were heavily involved in the Rising.

Museum curator, Brian Walsh said: “We are delighted to host this fascinating insight into the family life and connections of 1916 leader, Míchéal O’Hanrahan. While this may seem like a personal history, it also highlights the national significance of his contribution to the Rising, and his relationship with other 1916 leaders. The O’Hanrahan Chronicles exhibition also complements our own exhibition on the Rising and we would strongly encourage anyone with an interest in Irish history to pay a visit to the museum for these fantastic portrayals of Irish life during this time of revolution.”

The exhibition, which is believed to be the first of this kind put together by descendants of a 1916 leader, will run until the end of August.