Top economist says we need to 'chill out' over Brexit 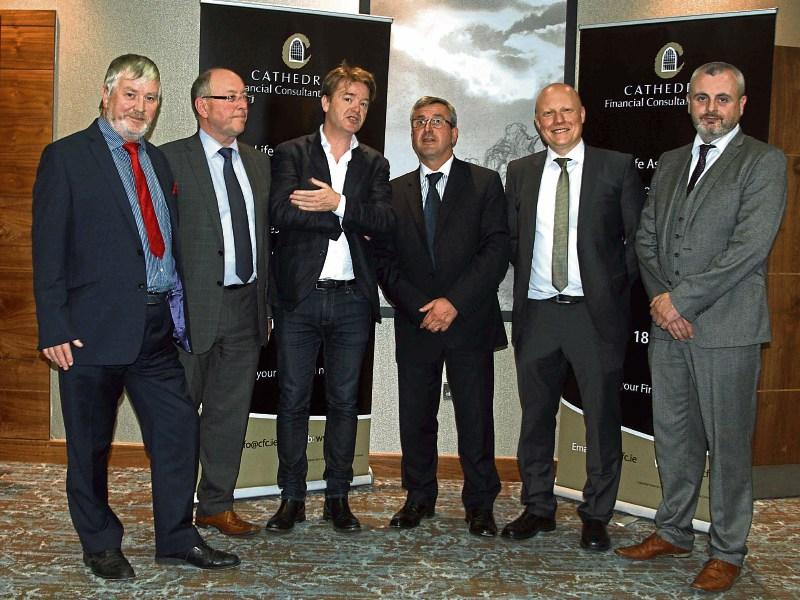 Ireland's most prominent economist a man with a track record of getting the big calls right believes there will not be a return to border controls.

What's more David McWilliams says Dundalk and indeed Ireland should not fear Brexit and that everybody needs to “chill out a little bit”.

McWilliams was speaking at an event last week held at the Crowne Plaza and organised by Cathedral Financial Consultants Limited on Crowe Street.

The bulk of Dundalk's major business owners and share holders were in attendance and after finger food and a wine/coffee reception, they settled in for the show. It was exceptionally well attended, with many having to stand at the back of the fully extended function room.

McWilliams who famously predicted the housing market crash in 2008, categorically predicted in March at the previous Cathedral event on Drogheda that the UK would vote to leave the EU.

Unusually McWilliams opened proceedings with a Yeats poem from 1916 - The Second Coming - which he felt was particularly apposite for the time in which we live:

“Turning and turning in the widening gyre

The falcon cannot hear the falconer;

Mere anarchy is loosed upon the world,

The blood-dimmed tide is loosed, and everywhere

The ceremony of innocence is drowned;

The best lack all conviction, while the worst

Are full of passionate intensity.

McWilliams said that unfortunately we are living in a world in which the 'best lack conviction, while the worst are full of passionate intensity,” and that the parralells between Brexit and this poem were there to be drawn.

The good news for Dundalk is however that McWilliams does not think that Brexit is a threat, and that it should not be viewed as one.

He was also withering about Northern Ireland's economy - likening it to a Marxist state and calling it “suppressive” and “difficult” in economic terms.

“It is no threat to Ireland, where we have a profoundly more vibrant economic structure”.

McWilliams says the only threat Brexit really causes is the impact it may have on collective confidence.

The verboss South Dubliner gave a compelling 90 minute talk that was at once entertaining, informative and- at times - raucous. He is natural orator and storyteller - but he also more often than not gets it right.

However in terms of geo-politics McWilliams was more circumspect - especially in relation to the potential election of Donald Trump.

He said “all bets are off” if he gets elected.

“He has been a political wrecking ball and he has destroyed everything in his path so far,” said McWilliams. “I think he will beat Hillary.”

However McWilliams said if that happens, he didn't “have a rashers” as to what would happen next.

He also regaled the audience with personal stories, including how when working in financial trading in London in the early 1990s he was quickly given the nickname 'Semtex' and that his first child was very nearly born in Dundalk.