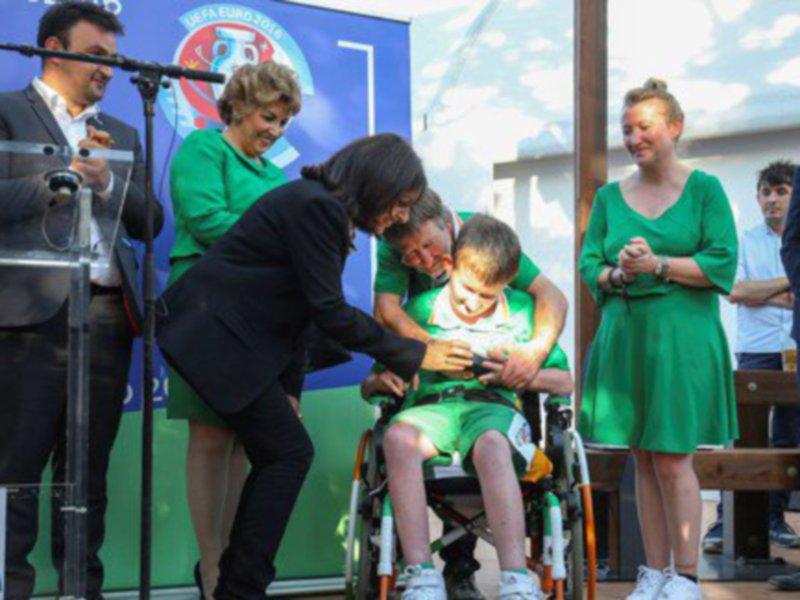 Euro 2016 has been an outstanding success.

Jamie travelled over from Togher with his Dad Philip and his sister Aoife, to receive the reward on behalf of the thousands of Irish fans, after he was nominated by the FAI to accept the reward.

Jamie has a condition called trisomy 9 mosaicism, which means he cannot walk or speak but this young man is hugely articulate and has been keeping his many followers and friends up-to-date on social media about the honour bestowed on this country by France and the honour he has felt in accepting the medal.

“Guess what,” he said. “I got the medal. “it was so nice to meet the Mayor Anne Hidalgo today and the Irish ambassador Geraldine Byrne Nason.

“Thank you everyone for your well wishes. France once again has shown me great hospitality.”

Jamie was also presented with a Paris Saint-Germain shirt by the mayor.

His father Philip said he was delighted for Jamie. “He loves his football.”

The Irish ambassador to France, Geraldine Byrne-Nason, described the occasion as “a unique moment for Ireland in France”.

Jamie made his way around France in a customised wheelchair with some extra-special features and his Dad Philip managed to get the Irish squad to sign Jamie’s wheels.

"My dad went all out and sprayed the wheel covers green, white and gold and sent them for the players to sign," said Jamie’s sister. "And fair play to them, they did.

"Dad literally got electrical tape in green, white and gold and decorated the whole frame.

There are very few parts of that wheelchair that aren't green, white and gold!"

And Jim Spratt, from county Down, received a medal on behalf of the Northern Ireland fans so it was a happy day for all of Ireland.