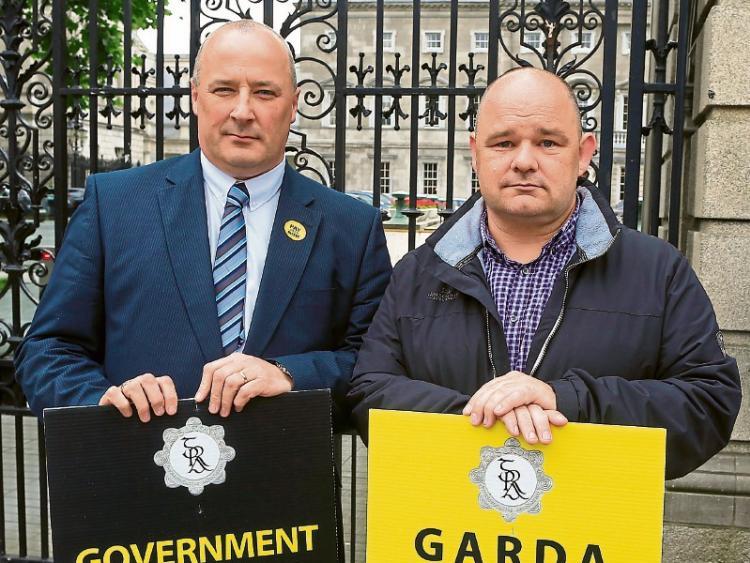 The Government’s threat of pay sanctions against gardai could affect morale in the fight against crime in the Dundalk and border area.

However, if there is any industrial action by the GRA (Garda Representative Association) it will not affect the public.

“We don’t want any conflict given the huge support we have from the general public,” Dundalk-based Garda Robbie Peelo said this week.

Garda Peelo is the Louth representative on the GRA central executive committee. The committee members protested outside the Dail last week and called on the Government to honour the terms of the Haddington Road Agreement.

The agreement expired on Friday but the gardai have refused to sign up to the new Lansdowne Road Agreement because no pay review was carried out under the Haddington Agreement as promised by the Government.

Last Thursday, members of the central executive of the GRA, including Dundalk-based Garda Robbie Peelo, protested outside Leinster House and called on the Government to honour the terms of the Haddington Road Agreement.

“It’s all about pay restoration,” Garda Peelo said. “We agreed to work an extra 30 hours, that’s three days, for nothing. We changed rosters, and weren’t allowed to lodge pay claims.

“The Government was asked to set up a pay review body but that has gone by the wayside.”

So as far as the GRA is concerned the Government has failed to fulfil its part of the Haddington Road Agreement and now gardai face a freeze of pay increments and rent allowances because GRA members have not signed up to the Lansdowne Road Agreement.

“We have a young garda on €23,000, who got 14 days notice that he was to be transferred from Cork to Dundalk, and will get no rent allowance,” Garda Peelo said.

The GRA said it would not be re-engaging in talks with the Government until the Government finishes the promised review of Garda pay and conditions agreed under the Haddington Road Agreement.

It has also said that industrial action has not been ruled out. Gardai cannot go on strike and the word is never even mentioned, but members of the GRA could still take action that would not affect the public.

Since the death of Garda Tony Golden last October twenty-four extra gardai have been assigned to The Dundalk Garda Division. This has resulted in a drop in crime figures and more arrests.

“The gardai here in Louth have a very good relationship with the public,” Garda Peelo said, “and that will remain so.”