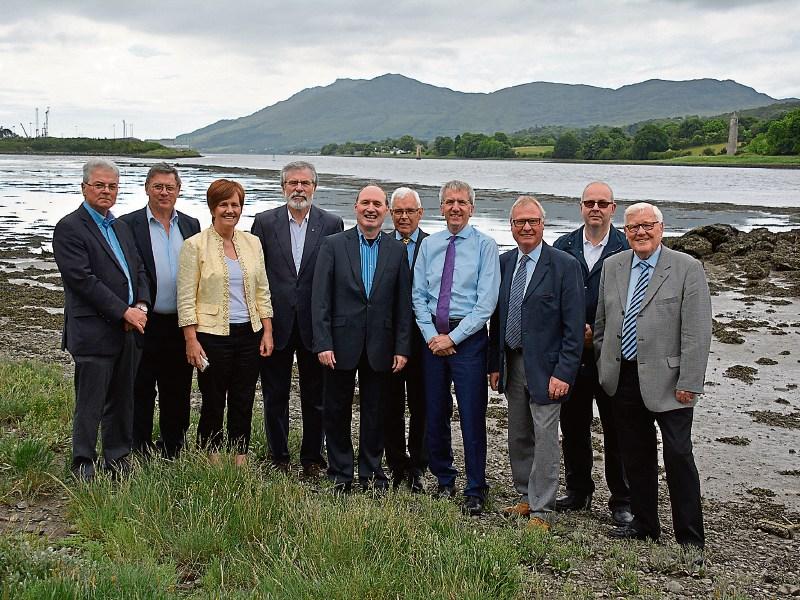 Comments by the North's new Finance Minister have given the pro-Narrow Water Bridge campaigners a welcome shot in the arm.

The chairman of NWBCN, Mr Jim Boylan, in his welcoming remarks to Mr Máirtín Ó Muilleoir, Stormont’s new Finance Minister on his recent visit to Warrenpoint, said that interest and demand for the bridge was now beginning to surge in the community following recent election pledges.

Mr Boylan also emphasized the cross-community, cross-border and non-party-political nature of the campaign to deliver the Narrow Water Bridge for all the people of the Carlingford Lough Area.

Adrian O'Hare, Secretary to the NWBCN, in a presentation to Mr Ó Muilleoir said that despite its unquestionable natural beauty and strategic location on the east coast, the Carlingford Lough area continues to stagnate in terms of tourist development.

Mr O'Hare said that last year 25 million people used Dublin Airport. A significant number of these, of which precious few were tempted north, were tourists.

The East Coast needs a counter-balance to the Wild Atlantic Way and recent growth in active and sustainable tourism may provide a real opportunity to achieve a more equitable distribution of tourism income.

Mr O'Hare shared figures produced by Fáilte Ireland, which indicated that a quarter of all visitors to Ireland go walking.

“People are rediscovering many of the ancient pilgrim paths, most of which go back to pre-Christian times. Counties Down, Armagh and Louth are especially rich in this regard with the connections to Ireland’s most iconic saints, Patrick and Brigid. Cycling tourism is also a growth activity,” said Mr O'Hare.

Quoting a recent Fáilte Ireland study Mr O’Hare said that Germany alone represented a target market of 11million cyclists. The NWBCN are convinced that the Narrow Water Bridge will provide the essential interconnector between Cooley, Gullion and Mourne which are classified officially as Areas of Outstanding Natural Beauty and are at the core of the tourism development strategies of Louth County Council and Newry, Mourne and Down.

Mr Boylan thanked Mr Ó Muilleoir on behalf of his committee for coming to Warrenpoint so early in his tenure and for his genuine commitment to do all within his remit as Minister of Finance to ensure the bridge was built.