Cleaner Greener Schools – The Pride of the County 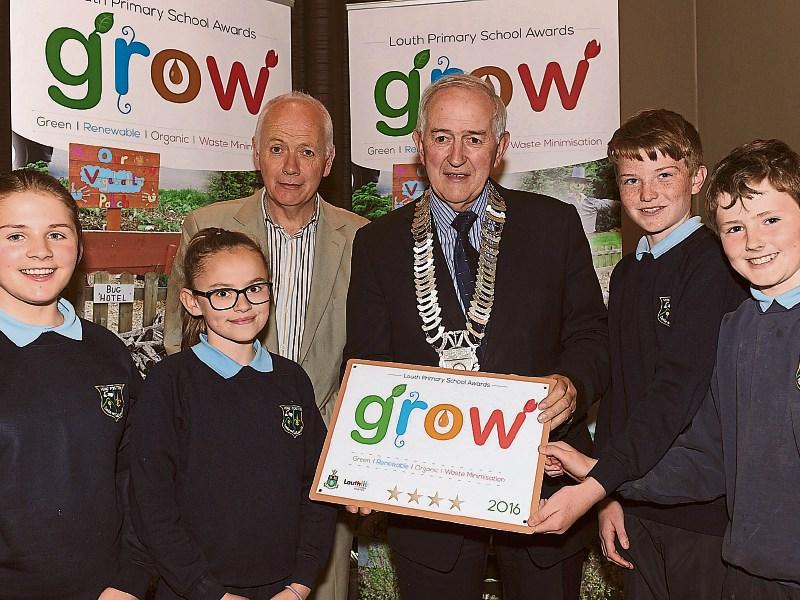 The primary schools of the county were celebrated in style at the ‘GROW’ Awards held in the Crowne Plaza Hotel on Friday.

An acronym for ‘Green, Renewable, Organic and Waste Minimisation’, this competition serves to reward our local schools for all that they are doing to make their environment cleaner, greener and more sustainable.

‘These schools are the pride of the county and we are gathered here today to celebrate them and their achievements’, according to Aisling Sheridan of Louth County Council. ‘With the pupils of today becoming the adults of tomorrow, this work is vital in ensuring that we conserve and protect our environment for the generations to come’.

Cllr Mark Dearey, the newly elected Chairman of the Municipal District of Dundalk, presented the award for ‘School of the Year’ for his area to Muchgrange N.S. An all round great performer in terms of sustainability and environmental awareness, this is a school which continues to improve year on year in leaps and bounds, so are well deserved winners of this award.

Cllr Oliver Tully, the newly elected Mayor of the Borough District of Drogheda was also on hand to present the ‘School of the Year’ award to his local area. The winner this year was Scoil Naomh Feichin, Termonfeckin. With a work programme that continues to develop year on year, this was the school which impressed the judges significantly in the south end of the county.

In mid Louth, the ‘School of the Year’ award for the Ardee Municipal District area went to Monastery NS, Ardee, for their work on a number of innovative projects, which explore all aspects of sustainability and environmental awareness.

The award for the ‘Best Special Project’ went to Presentation School, Ballymakenny, Drogheda for their comprehensive research into the life cycle of the Honey Bee, its importance to our surroundings and the worrying decline in the bee population. A very topical and well researched project, the girls of Presentation School, Drogheda, were the worthy winners of this award.

Ms Edel Lennon of Collon NS and Mr. John Farrell of Monksland NS were awarded ‘Teacher of Year for 2016’, Both of these exceptional role models have gone above and beyond the call of duty to deliver outstanding results, motivating and enthusing their young pupils and delivering excellent environmental programmes in their schools.

It’s not just the teachers but the pupils who were awarded at the ceremony with 16 students receiving ‘Highly Commended’ awards in the Junior Environmentalist of the Year competition. But it was two exceptional pupils who won the overall award on the day with Ciaran Murphy of St. Finian’s N.S., Dillonstown and Olamide Adegoke of Aston Village ETNS receiving the impressive accolade of Junior Environmentalist of the Year for 2016.

With almost 40 schools from around the county participating in the competition, the work being carried out around Co. Louth is outstanding and all participants were awarded plaques for their efforts on the day. It was Scoil Mhuire na Trocaire, Ardee, however, who scooped the top prize, being awarded the coveted 5 Star standard for two years in a row.

St. Peter’s N.S., Dromiskin won the Overall winner in the Eco Tribes competition, which they carried out in partnership with their local Tidy Towns group.

As the Cathaoirleach of Louth County Council, Cllr. Peter Savage, commented on the day ‘The environmental programmes being carried out in our schools are second to none and are the pride of the county. I acknowledge and applaud you all and long may it continue’.