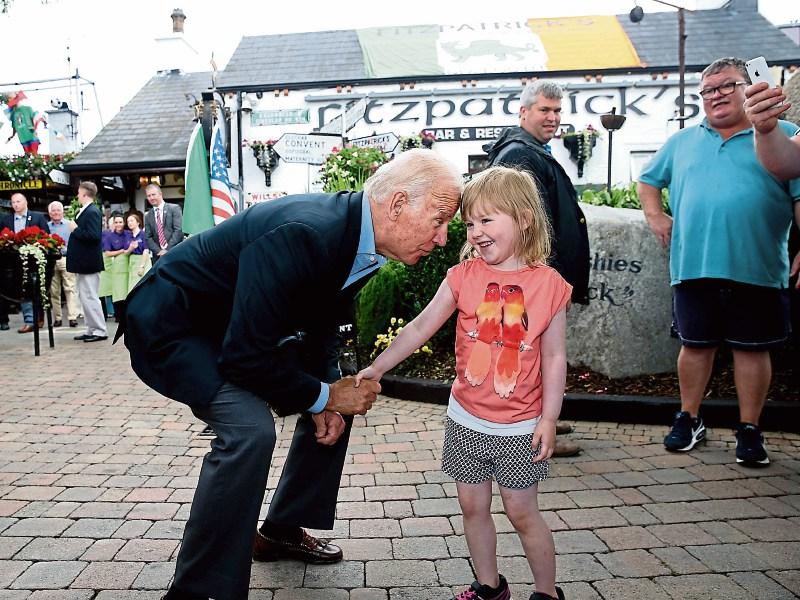 The secret service man asigned to us is named Joe.

Joe looks like a secret service man - straight out of 'House of Cards'. His head is imacculately shaved, he wears a black raincoat that looks designed to conceal an arsenal and on his lapel he wears a red badge with an 'S' on it.

Joe is polite and professionally detached, has a nice line in deadpan humour and the air of a man that would end your life without breaking a sweat.

Joe tell us that he speaks in a low voice generally, but that if he has to speak louder then it's a good idea to listen.

We are accompanying the Vice President on the second last day of six day tour of Ireland. After a long wait at Newgrange, we (the local press at least) get our first view of the Biden family.

They are a handsome family, and have the wholesome, clean living look of the classic American family.

VP Biden was travelling with his family, including with his daughter Ashley and five grandchildren, as well as his brother Jimmy and his wife.

From Newgrange we board a luxury, leather seated Mercedes press bus. We travel by cavalcade and it is an experience that live with this humble local newspaper reporter.

The Whitehouse have flown out fourblack Chevrolet Suburan who weigh over four tonnes each.Each has special forces commandos in the back, and assault rifles in the front. There are also four BMW X5, and an asortment of other tank like vehicles. This is of course not to mention the support vehicles carrying his staff, the garda cars and our three press buses to the rear. Added to this a helicopter flies overhead, overseeing us from the skies.

In total we count over 20 vehicles, carrying easily over 100 people.

About 40 of this 100 could well be secret service men, who all appear to wear an informal uniform of navy blazer, shirt, khakis and of course sunglasses. They look like ex-military types and have that cold detachment.

Thousands linethe route, waving flags - both Irish and American. Someone even has an 'Underwood 2016' poster, a joke not lost on the press pack.

At Fitzpatrick's Mr Biden met the Kearney family - including Ireland and Leinster winger David - for lunch. Upon leaving VP Biden - ever the polished politician, meets Aoibhinn Brennan. His advice: “No serious dates until you are 30-years-old,’’ before turning to the crowd adding: “I speak for every father, don’t I ?’’

VP Biden has the cut of what we imagine an American head of state to be - at least in the years before Barack Obama became the first black President. He is tall, grey haired and statesmen like - a poster boyof sorts for what American Presidents looked like - in 1980s movies at least.

In Carlingford An Cathaoirleach Cllr Paul Bell presented the Mr Biden with the Honorary Freedom of the County and a replica of the Brown Bull of Cooley made by local craftsman Joe Lawler.

In his speech he played the crowd like the old hand that he is. He recounted his roots in Ireland, saying how he was shocked at the accuracy of the stories he had been told about his family's heritage in his own youth - a heritage evidently very close to his heart.

At one stage the mobile of one of our elected representatives went off, and quick as a flash the Vice President said: “That will be Barack!” which won him a heartfelt laugh from Heritage Centre floor.

Yet the backstory to his visit to Cooley is also very much tinged with sadness, His son Beau died last year from cancer. It had been their plan to visit Ireland together and the trip clearly had an emotional resonance for the Vice President.

As polished a politician as Mr Biden undoubtedly is, there was no doubting what this trip meant to him.

Following the civic reception the entourage spent at least 30 minutes on a walkabout to meet the people of Carlingford, before the cavalcade moved on to picturesque setting of Kilwirra cemetery near Templetown Beach.

Maybe the most raucous reception lay ahead at Lily Finnegan's in Whitestown, where the day drew to a close amidst country music and a fewpints of Guinness.

There was no denying a sense of a shared history between the Biden family and people of the Cooley Peninsula. This was very much a homecoming and the Wee County saved its very warmest embrace for this Irish American family and their sincere desire to reconnect with their roots.