Helena reprises the role of Queen Meabh for Tain March 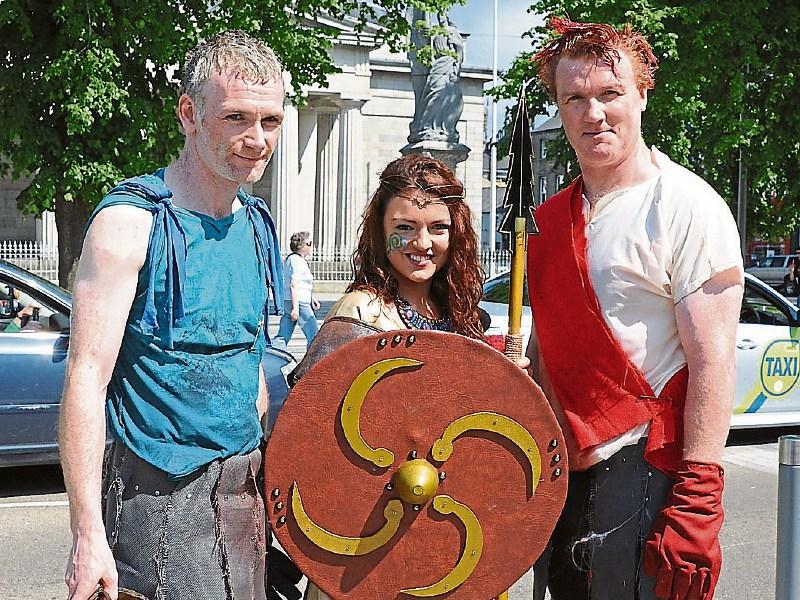 THE re-enactment of the Tain March has become a firm fixture on the tourism calendar for many on the Peninsula and for Helena Mullins the role of Queen Meabh has become one not to be missed, having recently completed her 5th March in the Iconic role earlier this month.

“I love playing the role of Queen Meabh and interacting with the children. I’ve been involved from the beginning almost. For the past 5/6years. I’ve a huge interest in the story of the Táin. I grew up reading the táin tales and my parents’ family-run Guesthouse is connected with the Táin. The Glen Gat Valley in Louth is where the Brown Bull of Cooley was hidden from Queen Meabh and the logo of our B&B is the iconic painting of the Brown bull of Cooley and the White Bull of Connaght in battle’.

“I love the family element to the Táin March Festival. The Táin story is still on the primary school curriculum so we make it as interactive, informative and fun for everyone involved. I help to do face-painting and encourage people of all ages to dress up and get involved’.

“My whole family is involved in the march. My dad, Tim, is on the Committee, my sister Kate is a primary school teacher in Lordship and teaches the children all about the Táin stories and comes out to support us and my mam, Catherine enjoys the walking and also enjoys Paul Gosling’s storytelling along the route of the walk. Paul plays the role of the Historian druid of that time, a storyteller in his own right.

There are many other families involved, children and partners of people on the committee and those who just hear about it and join in on the day or over a few days of the Táin festival. Sinead Roche in the Dundalk BIDS office does fantastic work to highlight all events throughout the year and she’s been very involved in the Táin March Festival since the start. She’s doing such a great job at putting Louth firmly on the map”.

Helena is also delighted with how event has grown and evolved since her first March,

“It’s such a wonderful event full of fun and interaction for all to enjoy. It is a unique event to Louth and I’m so glad to see that it has evolved and now runs from Roscommon to Louth. Louth Land of Legends leading the way in Irish tourism! You meet so many amazing, pro-active people in each community and the crowd gets bigger every year. I like to see communities progress and I love the fact that the March happens to march through small towns and areas which don’t get much business or footfall throughout the year. It helps to give the area a lift. That’s what makes me do it each year, it helps to lift everyone’s spirits’.

“The highlight of this year’s March for me was in Ardee where I handed the crown over to a lady called Rita from the old folks’ home to play the role as Queen Meabh in front of her peers. She was so excited. That’s what the Táin March festival is all about; including everyone and making it a special day for all”.

“I’ve no doubt that this will be as sought after as the camino walk is in just a few short years. Last year was the first year that we walked from Roscommon and just look how much it has grown.

“ It’s all about community and lifting the spirits of parts of the country that maybe don’t get a lot of footfall. The Táin March Festival maps out a route for a walk that can be celbrated and enjoyed by anyone all year around but if you want to get the full experience with a guided walking tour in costume, join us next year!”

Though she may well reprise her role as Queen Meabh again next year Helena is also kept busy working for PR and communications consultancy, Stillwater Communications in Dublin aswell developing her considerable repertoire as a presenter.

“I love the creativity and seeing another side to media other than what I’m used to, i.e. presenting.

“I’ve worked on huge PR campaigns such as Darkness Into Light, the Pieta House annual fundraising and awareness event which took place in May, and was a huge success this year with more than 120,000 taking part across the world’.

“I was also working on the Oireachtas Media Awards which Micheal D Higgins attended to celebrate 20 years of TG4 in May. I helped to get national and local press for these events and I also work on a broad range of social media sites for Stillwater’s clients.

“On the weekends I work with LMFM as their roving reporter and I’m always on the lookout for new and exciting presenting roles’.