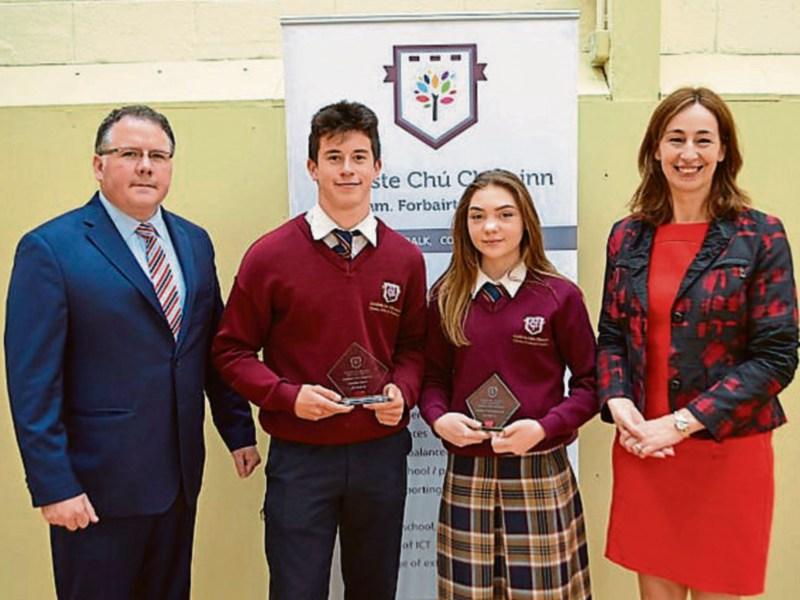 The end of the year at Coláiste Chú Chulainn Dundalk was marked by the annual awards ceremony last week.

Awards were presented in many categories such as subject awards, attendance and awards centring on the school’s motto of “Cúram. Forbairt. Feabhas.” (Care. Development. Excellence.).

Student of the Year was presented to 1st year student, Micheal Dunne, who had displayed excellence in her academic work throughout the year as well as participating fully in the life of the school as a member of the school’s Irish-language quiz team and debating and public-speaking teams.

In 2nd year the Feabhas award was given to Leon Brown who was nominated both his excellent work in school as well as his success at SciFest in DKIT where, with fellow student Victor Adejobi, they claimed first place for an innovative project on Hydro-bags, a new modern alternative to sandbags as a protection against flood damage.

Awards were also presented to students for excellence on the sporting fields and in the many extra-curricular activities that take place in school.

Joe Mee claimed the prize for Sportsperson of the Year for helping the school reach the Louth Colleges Shield Final in their first year in the competition as well as playing a central role in the U14 soccer team’s progress in the North-Leinster competition this year. Joe was also one of the five students from Coláiste Chú Chulainn that were selected to play on a Louth Representative Rugby team.

The Activities Award went to Caoimhe Kampes for her successful participation in a number of extra-curricular activities throughout the year.

Caoimhe claimed the top prize in the Junior section LMETB Art Competition and was part of a very successful Student Enterprise group in the school. Kellie Mc Kevitt received the LMETB Civic and Community Award, a prize which is given in all 18 LMETB schools for the students whose efforts make the greatest contribution to their local community. Kellie is a member of the student council that organised a number of charity and voluntary events throughout the year.

Principal Deirdre Uí Liatháin spoke of her pride at the success of students in the past two years and acknowledged the variety of work taking place inside and outside of the class.

She acknowledged the success of the many teams in the school and the ever-increasing participation of students representing the school in sports, music, drama, public-speaking, student enterprise and many other endeavours.