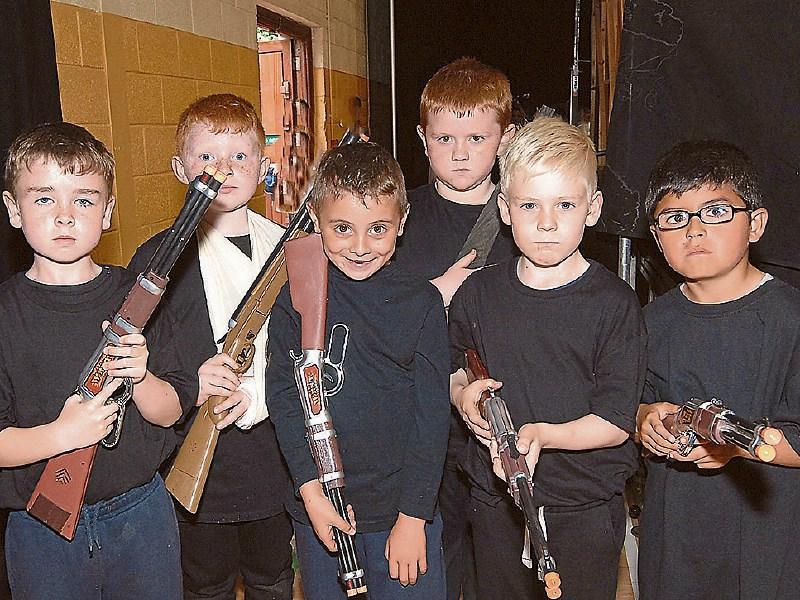 Between six and nine hundred people were in attendance to see a spectacular entertainment and historical re enactment of the events surrounding the Easter Rising of 1916.

There have been many Easter Rising commemorative centenary events in Louth this year but this must rank as one of the finest.

Before the event began there was a minute's silence for Jackie Kinahan who died earlier in the day, a fitting tribute to one of Dromiskin's favourite sons. Jackie's grandson Oisin McGinn sang as John McCormack in the play.

At Jackie's funeral on Saturday there were beautiful tributes from his grand daughter Annie and his son Gerry.

But Thursday night belonged to the children of St Peter's and how brilliant they all were.

The backdrop was a green floodlit photographic image of the GPO and the cast of 230 consisted of pupils from five to 12. It began with the build-up to the Rising, the Toffs, the Edwardian elite, at a graden party.

In magnificent costumes, and superb plummy accidents, they drifted and mingled on the garden lawn oblivious to the revolution that was about to take place right here at home.

The social inequality that existed in Ireland at the time was highlighted in the second scene in which the Dublin tenement urchins played and shouted in the streets, and performed great Irish dancing.

Meanwhile, the Irish Volunteers were arming and drilling and preparing for conflict.

How one school could produce a show covering all the diversities in the society of this country leading up to the Rising is just amazing.

And the script was witty and funny and sprinkled with great local references: the great James Morgan (former school principal) who played for Louth when they beat Kerry in the 1913 All-Ireland, Jimmy Mcdonald of Darver a star on the ‘57 team. And the street urchins even managed to rob Joe Kinahan, my next door neighbour’s pear trees. I didn’t think anybody remembered the pear trees.

After the Irish Volunteers we were introduced to the Ulster Volunteers with their orange sashes and bowlers. Edward Carson declared he was a loyal servant of King George VI.

Then it was the turn of Mna na hEireann and Countess Markievicz who made it quite clear that the women of Ireland were ready to fight as well. And only in Dromiskin would they have the imagination and the wit to get the countess to lead a Spice Girls routine.

The funeral of O'Donovan Rossa, a pivotal moment in the revolution, was brilliant. Here was Pearse with his iconic speech,

Then we had the more realistic Eoin McNeill chief of staff of the volunteers, who thought the rising unwise and impractical, James Connolly and others.

Even Miss McGuinness took secretarial notes as confusion arose as to whether the Rising should go ahead or not, and the Newsboy announced that Casement had been captured off the coast of Kerry.

The volunteers occupied the GPO. Soon the centre of the city is in turmoil. We get accounts from all sides about what is happening, but by Friday food and ammunition is low. There is nothing left to do but surrender. The brave volunteers give up their arms. We hear a great rendition of The Foggy Dew by Patrick McKenna and another beautiful duet by Ruth and Joanne Andrews when Grace and Joseph Mary Plunkett are married just before his execution.

And at the end, the young men from Dromiskin who lost their lives in the First World War were also remembered because this was a story about idealism, the nationalism and imperialism that existed in the country at the time. The production, superbly narrated, was directed by speech and drama teacher Miss Michelle Boyle and Principal Pat Mulligan, who thanked all who helped.

“What about our wonderful children,” he said. They are a credit to their families and their school.”