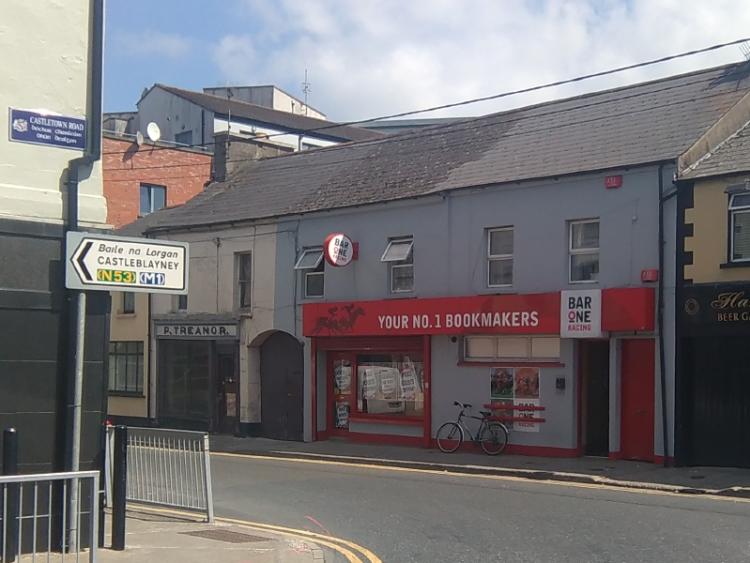 A man who denied being a lone raider who targeted a local bookmaker’s while armed with a knife, was last week convicted at Dundalk Circuit Court following a three day trial.

Keith Hughes (25) of Oakland Park, Dundalk had pleaded not guilty to robbing €235 from Bar One Racing, Bridge Street, Dundalk on May 22nd last year and denied possessing a knife “outdoors and at Bar One Racing” on the same date.

At the start of the trial the jury watched CCTV footage of the robbery, which happened shortly after 10am and lasted less than two minutes.

The first witness – who was a deputy manager of the shop¸ told the court that a man wearing a hooded top came up to the counter with the hood up.

She initially passed no remarks but then saw he had a knife in his hand and she said she started screaming and shouting.

A customer said he had been writing out a bet, when he heard a commotion and he saw a man with a knife behind him, where the cashier sits.

He said it looked to be a kitchen knife and the raider grabbed something from the counter, turned and “just ran”.

Another customer said he was looking at the TVs, when he heard a fracas behind him. He heard the deputy manager and saw a young man with a knife behind the counter saying “Give me the money”.

A manager from Bar One Racing’s head office on the Ramparts, gave evidence in relation to the downloading of CCTV footage, while a cleaner who was on duty told how she had seen a man with a hood up, hold a knife over the manager’s head and neck area.

She estimated that he was approximately 5’ 8” in height.

The manager of the premises told the jury he had been speaking to the Park Street branch of Bar One and had just hung up when he heard screaming and he saw a man standing behind him – a metre or less away from him.

He said he was fixated on the knife and kept a chair between himself and the raider, to keep his distance.

He said the knife was like a kitchen one used to cut bread – not one to you would eat your dinner with, and the blade was at least six or eight inches long.

He said the man holding it was shouting for money and lunged over towards the counter and grabbed about €240 in cash that was under a keypad – four €50 notes and the rest in smaller denominations.

The witness said he stepped back and as the raider moved to leave from behind the counter, he kicked the chair towards the robber. The manager said he followed the man for two or three steps, before he left through the front door onto the street.

The jury heard that Keith Hughes was arrested on suspicion of robbery in the Pearse Park area that afternoon.

During his interview, he told gardai, he does not gamble and was not sure where the bookies is.

After he was shown CCTV footage of the robbery and the lone raider, Keith Hughes said he didn’t know the person.

When asked if his DNA or finger printers would be found behind the counter, he replied “That’s not me on the screen and also I don’t carry a weapon”.

He said he didn’t need an alibi for something he didn’t do and when he was told that would clear him of involvement the accused replied “This isn’t me so it rules me out straight away. It’s not me 100 per cent and it never will be”.

Earlier, during cross examination by the Defence, the garda who was in charge of prisoners in custody, said she had no answer, when asked why the defendant’s height was not recorded in the custody record.

She said she was not an expert, when it was put to her the accused is six foot in height.

In his closing speech, Defence counsel Jim McCullough B.L said there was only one piece of evidence in the case – the CCTV footage and a still taken from it.

He argued that none of the witnesses had been asked to identify the man who carried out the robbery, and he told the jury the man in the still was not the accused and he claimed the case had not been proven beyond reasonable doubt.

Last Tuesday afternoon the jury – seven men and five women, returned the unanimous guilty verdicts for both counts after less than hour and a half of deliberations.

Judge Leonie Reynolds adjourned sentencing until the 16th of June and remanded the accused in continuing custody.