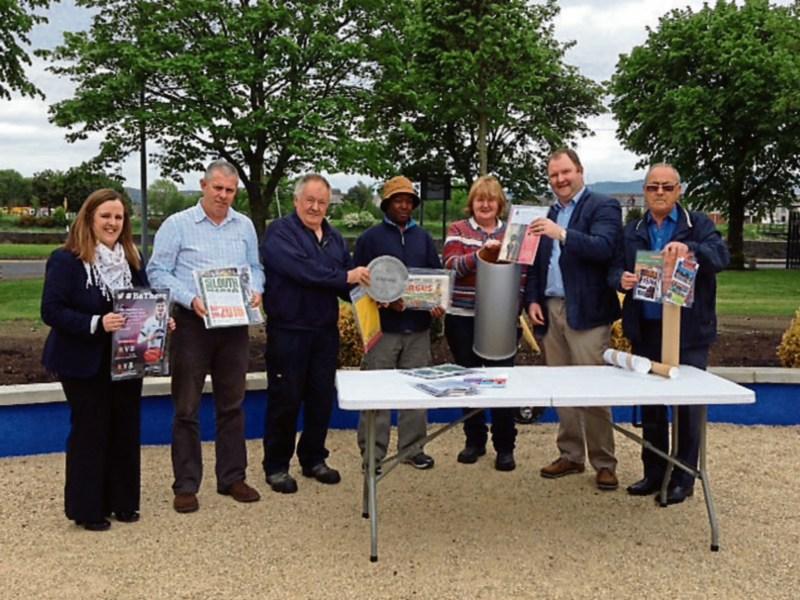 A timecapsule has been buried in the newly opened Thomas Clarke Memorial Garden.

According to Tidy Towns Chairman, Willie Duffy: “As the idea for the Memorial Garden began to take shape the County Museum, Dundalk approached us with the idea of placing a time capsule in the garden, and we thought it was a great initiative.

“If anything it completed the project, here in effect we have past, present and future coming together in the one area.

“We’re reminded of the sacrifice of Thomas Clarke and those who mobilised in April 1916; then we have in the capsule items we use on a daily basis which will provide a unique and hopefully personalised insight into our lives when opened in 100 years time.”

Among the items to be buried were a collection of proclamations written by Dundalk schools as part of the Proclamation Day activities held in March; a selection of shopping receipts and brochures indicating the type of food and consumer consumption in 2016; and a poster promoting Dundalk FC’s matches v Galway United and Bray Wanderers.

A selection of event brochures to highlight the nature of leisure and event activities available in Dundalk were also added, along with sample documentation from Louth County Council including the calendar of events organised to mark the Rising’s Centenary.

Added to this were a selection of items associated with the County Museum’s 1916 exhibition The Birth of a Nation – these included posters, postcards as well as the reviews from History Ireland and Reveille magazines.

“The idea was an invaluable opportunity to show future generations the nature of life in the town in a profound and personalised way,” said Museum Curator, Brian Walsh.

“One of the items we included was a description of what life was like in Dundalk in 2016.

“ We realised that we had to explain the significance of each item included in the timecapsule.

“ By assuming that the future will be radically different we had to explain things as simple as the use of cash, petrol and diesel fuel etc.

“ We had to highlight the impact of the recession and the impact that that has had on all of us, much of can be seen in the range of items that have been buried.

“Ultimately this has been a very rewarding exercise and we’re delighted and honoured that Willie and the tidy Town’s Committee embraced the idea.”