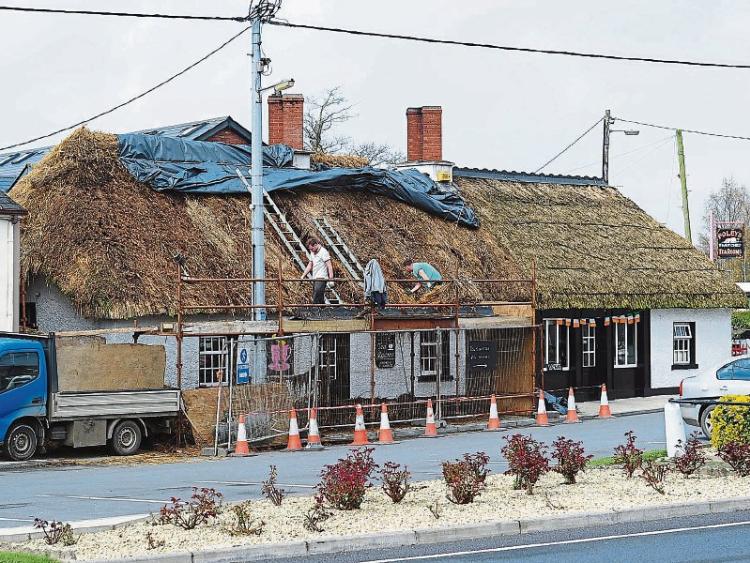 The current thatching project at Foley's is part funded by Louth County Council and the Department of Arts, Heritage and Gaeltacht Built Heritage Investment Scheme 2016.

It was a gloroiusly sunny day and perfect conditions for the thatchers to demonstrate this wonderful craft and historic skill.

Participants from Dunleer Men's Sheds and Castlebellingham/Kilsaran Tidy Towns Committee also attended the afternoon demonstration. Joe Donovan proprietor of Foley's Tea Rooms is looking forward to the completion of the entire thatched roof and it is anticipated the works will be completed within 6 weeks.

Foley's Tea Rooms is the last building in Castlebellingham to retain a thatched roof and Mr Donovan has worked dilligently over the past number of years to retain this building which is an important part of our vernacular heritage.

There are different types of thatch, – wheat, rye and oat straw, water reed, wheat reed, sedge, heather, flax, which were used in the areas where they were normally found in the wild, or were grown for other agricultural uses.

The most common types of thatching material traditionally used in this area (Louth / Meath) were long straw of either oats or wheat, using thrust thatch style. Reed has only been introduced in north Leinster in recent times and is usually imported from England, Poland or Turkey. Rye is occasionally used.

Thatching is an important traditional skill which must be preserved. There is a shortage of skilled thatchers in Ireland. There is an urgent need to pass on the skills to a new generation, particularly working with historic thatch.

Peter Childs is a Master Thatcher with an award-winning apprenticeship from the Countryside Agency’s (England) Thatch Training Centre in Salisbury, Wiltshire, UK.

Using scolb thatching, slice, thrust or fletch thatching, stitching or sewing on. Examples of his craftsmanship can be seen in Skerries, Rush, Balbriggan, Ballyboughal, Oldtown, Meath, Westmeath Louth Monaghan, Armagh, Clare, Wexford and Mayo. Eoin Murphy and Alan Grimes have worked with Peter Childs for 12 and 13 years respectively and are qualified thatchers working on this project with Peter.