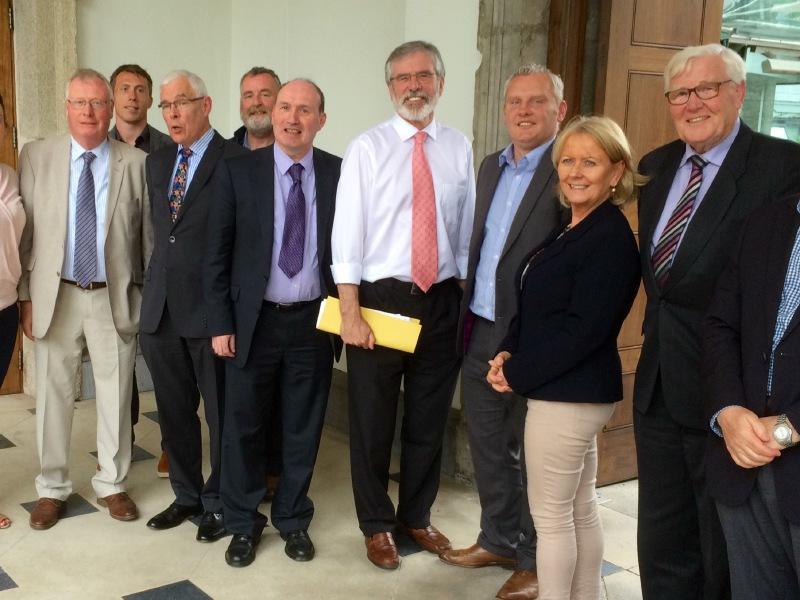 Sinn Féin Louth TD Gerry Adams has called on the Irish Government and the Assembly Executive to work together to seek funding to construct Narrow Water Bridge.

Deputy Adams hosted the Narrow Water Bridge Community Network group in the Dáil on Wednesday 25th May where they presented the case for the construction of the bridge to assembled TDs and Oireachtas staff.

“This campaign has been ongoing for decades and I want to commend those who have been promoting the project tirelessly despite numerous setbacks.

“This is a vital piece of infrastructure for the whole of the Mourne, Gullion and Cooley area which has been so intricately linked for centuries.

“The need for the bridge is well recognised.

“It is included in the Irish Government’s 2016-2021 Capital Investment Plan. An Oireachtas Jobs, Enterprise & Innovation committee recently reported that it is essential to the economic development of the region and the Fresh Start Agreement in the North mandated the Northern Executive and Southern Government to review and develop the project.

“The recent appointment of Sinn Féin MLA Chris Hazzard as Infrastructure Minister in the Assembly Executive is good news for this scheme and I welcome his public support for this project but he cannot deliver this project alone.

“The Narrow Water Bridge Community Network’s presentation includes newspaper reports from 1976 calling for this project. It is high time for a step change in government priority and support for Narrow Water Bridge must change from concept to reality.

“It is not acceptable to delay it any longer and as an outcome of Wednesday’s briefing I am currently drafting a letter to the Minister of Transport, Shane Ross and the Infrastructure Minister Chris Hazzard which I am asking all TDs and MLAs in the constituencies of Louth, Newry Armagh and South Down to co sign.

“This will send a powerful message of the level of support for Narrow Water Bridge which must not be ignored.”